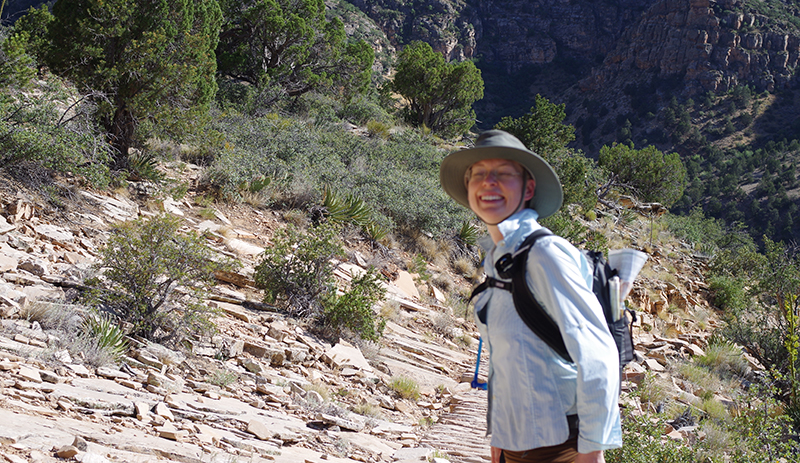 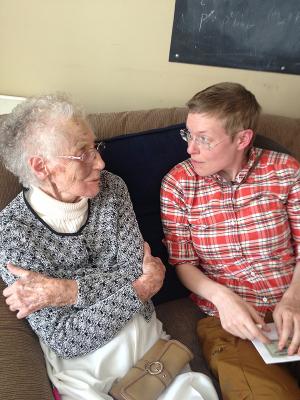 Some might flee from the dark and mysterious, but Amy Roberts runs headlong toward it. She joined the Department of Physics at the University of Colorado Denver last fall as an assistant professor. Roberts’ research focuses on dark matter, a type of hypothetical matter that is different from ordinary matter – the protons and neutrons and electrons that form atoms, which make up everything we see and touch every day. Dark matter, on the other hand, has never been seen, but scientists estimate that its presence accounts for the majority of matter in the universe and explains some astronomical phenomenon.

Roberts earned her Ph.D. in nuclear physics from the University of Notre Dame and worked as a postdoctoral researcher at the Los Alamos National Laboratory and the University of South Dakota. When she began applying for faculty positions, she wanted to be close to family and a national park. Denver fit the bill: “It was too perfect,” she said. She loves hiking – hence the national park -- and roller derby and has joined the recreational derby league in Denver for weekly skates.

1. How did you choose this career path and was there a person or event that influenced you? 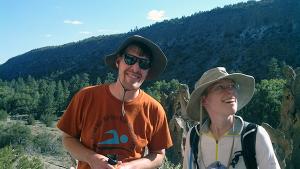 I chose this career when I was quite young, and I happened to be good at it, so I ended up sticking with it instead of picking another career. I was always an observer. I grew up in the country in Indiana where there was a lot of rocks and mud, which were fascinating to me – and I guess they still are. As an early teen, I read a book by Richard Feynman called “Surely You’re Joking, Mr. Feynman!” The book is sort of a life and times of an outgoing, Nobel Prize-winning physicist. Looking back, it amazes me that I read that book and recognized information in there about what it is that a physicist actually does. I read the book and thought, “Wow! These are things that I’m interested in and can get paid to do, so that’s what I’ll do. I’ll be a physicist.”

It was lucky that I found the job description of a physicist, which isn’t something I necessarily would have been exposed to. When I was in high school, I got connected with a theoretical high-energy physicist, Monika Lynker, at Indiana University South Bend. She met with me all through high school once a week and we would do electronics projects and measurements, and I would ask her questions about theoretical high-energy physics. Having that chance to talk with a physicist early on gave me a really clear idea of what types of physics I was interested in, and it also gave me a really strong sense that my thoughts matter in this space. Both of those experiences were incredible and are some of the reasons I am employed as a physicist today.

2. What is dark matter and what appeals to you about the research you do?

Dark matter is still a mystery in a lot of ways. Fundamentally, there are two components of the universe that people talk about – matter and energy. Matter consists of normal matter, which we can see, and dark matter, which is mysterious matter that we don’t see or fully understand. Both kinds of matter pull things together in the universe. We see galaxies and clusters of galaxies that are getting pulled together more than you would think based on the light that we can see coming out of them. We think there is mass there pulling things together, but we don’t see it, so we named it “dark” matter.

One of the things that is compelling about dark matter is that the amount of pulling together that we see – the amount of gravitational attraction that we seem to observe – doesn’t match up with how much light we see coming out. The ordinary matter – gas and stars – doesn’t account for what we gravitationally observe, and the discrepancy is really large. We have estimated that the stuff we are familiar with is 15 percent of matter, while dark matter – what we don’t see and don’t know where it is or where it comes from – is 85 percent of all matter. That’s a huge fraction of the universe that we don’t understand. I like that Wild West aspect of dark matter.

The other thing about dark matter that I really enjoy is that one of the ways you can search for it is by using very sensitive detectors. That’s the kind of dark matter research that I do. Detector technology that is involved with searching for dark matter is incredible and pushes the edge of what we can do with technology. I love being close to actually sensing the world.

3. How do these detectors work and what are some impediments you face? Are there other ways of studying dark matter?

We know that dark matter doesn’t interact very frequently with normal matter. So we build detectors that can sense even a very small interaction. When normal matter is hit, electrons can be freed from their atoms – this gives us an electronic signal. Our detectors also sense phonons, which are vibrations of the nuclei in our detector. As an example, a salt crystal is a bunch of atoms stuck together, and at the center of each atom is a nucleus. These nuclei vibrate back and forth, and we can sense those movements. It is sound that we sense, but we don’t sense it with our ears, we use superconducting phonon sensors.

I participate in a direct-detection dark matter search, with the Cryogenic Dark Matter Search (SuperCDMS). For the last 10 years we ran our detectors deep in the Soudan Underground Mine (which hosts a laboratory for sensitive physics experiments) in northern Minnesota. We’ve recently started the move to a deeper mine in Canada, SNOLAB.

We need to be deep underground because we don’t expect the dark matter to hit normal matter very hard, so we need to be able to detect the slightest nudge. But this amazing sensitivity can also be a problem. There is plenty of stuff that is happy to interact with normal matter. If you place your detector on the surface of Earth, you’ll constantly see signals from neutrons from cosmic radiation, and those neutrons look a lot like dark matter particles. It’s radiation soup on the surface, so we run away from it to places where things are quiet enough to notice dark matter.

External radiation isn’t the only concern for very sensitive detectors. We need to read the signals from our detectors, and to do that, we need to attach a wire to our detectors. But some wires are pretty radioactive! We have to make sure anything we put next to the detector doesn’t emit a lot of radiation, so we have to screen materials carefully.

We keep building detectors that are more and more sensitive – and at some point, we’ll start seeing signals from the neutrinos coming from the earth’s core. That’s incredible from a geophysics and neutrino physics perspective, but it’s a problem for dark matter searches. Neutrinos are a background that we can’t run away from or shield against. One of the ways we can step around this problem is with dark matter detectors that tell us the direction of the incident radiation. These kinds of detectors already exist, but increasing their sensitivity is a challenging problem.

4. What are some of your long-term research goals?

When we see a signal in our detector, we need to take that signal and interpret the physics of what just happened. This involves understanding how energy is deposited in the detectors. Because we are pushing to get these smaller and smaller signals, we are starting to get into territory where we don’t understand terribly well what is really happening when we see that signal. Understanding what’s happening at the atomic scale is one of the areas that I’m starting to get involved with in dark matter research.

I’m also involved with data acquisition – getting that signal onto a computer disk so we can analyze it.  This step is absolutely critical to science, but we often develop data acquisition systems in isolation. No one can share their work, so we end up solving the same data acquisition problems over and over again as a community. One of the things that I’m hoping to do is develop some standards and tools that can be used by the entire low-count-rate physics community. One of the things I’m interested in is developing some standards so that we can start sharing what we build in the community.

5. What is one item you keep in your office that you can’t live without?

I’d say the Chart of Nuclides, which is an amazing summary of all known nuclei. My background is in experimental nuclear physics and if you go into a nuclear physics lab – they are tough to find because a lot of them have shut down – you will find this chart. It’s amazing how useful it is. I always feel as if the chart is my map and I keep one in my office so that I know where I am.