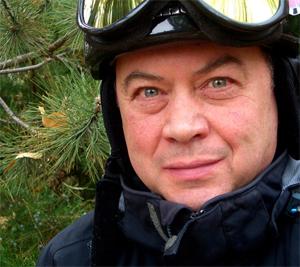 When asked to explain how he chose to immerse himself in the fields of mathematics, art and film history, Alexander Soifer easily answers: “I am a student of Beauty in all her manifestations.”

The UCCS professor grew up in Russia, moved to Colorado for the mountains, and has been making his mark on the university for 36 years. He founded the Colorado Mathematical Olympiad and is president of the World Federation of National Mathematics Competitions. In 1990, he was chair of the university’s Privilege and Tenure Committee. He spent several years as a visiting scholar at Princeton University and Rutgers University and is editor and publisher of Geombinatoricsresearch quarterly.

Soifer said he was honored to be able to team-teach UCCS classes with two honored film directors, who he invited to the university: Yuri Norstein, whose film “Tale of Tales” has twice earned the title of “greatest animated film of all time” from panels of international judges; and Andrey Zvyagintsev, who has won numerous international honors, including a 2015 Golden Globe for “Leviathan.”

He’s the author of many books and hundreds of articles. His current work includes “Problems of pgom Erdös,” a book about “the greatest problem creator of all time, and also friend, coauthor, and mentor,” Paul Erdös, who personally selected his favorite open problems for the upcoming publication. A book about the third decade of the Olympiad and another about his memoirs are in the wings.

Next month, a chapter written by Soifer will appear in the Cambridge University Press publication “Topics in Chromatic Graph Theory,” and John Nash at Princeton (“A Beautiful Mind”; Nobel Prize, 1994; and Abel Prize, 2015) has invited him to write a chapter in a book about famous unsolved problems of mathematics.

“I have some percent of a rebel’s blood,” he said, referring to his writing and to life in general. “I don’t follow the rules that my mind doesn’t accept as reasonable. In fact, I take delight in violating unreasonable rules.”

1. You were reared and educated in Moscow. How did you come to be at the University of Colorado?

At the point of the Russian invasion of Czechoslovakia in 1968, I was awakened as a social person. I realized that I am responsible for what my country does on my behalf. I found myself to be a free man in a country that cannot stand free thinkers. So, there were only two honest choices: climb on barricades or get to an airport.

America is much, much better, even though you also pay for criticizing your boss here. I am simply willing to pay that price.

When I first came to the U.S. in 1978, I taught at the University of Massachusetts in Boston. I survived the first winter and then I applied to probably 100 universities and got three offers. Pessimists would say that’s very low, a 3 percent return; optimists would say, “How many jobs can one accept”?

I didn’t accept the obvious choice to stay in Boston; I was eager to see the country so I had to choose between Colorado Springs and the University of California at Los Angeles. I was interested in the mountains and came here in 1979. I’ve been here for 36 years.

2. How did you choose a career that focuses on a mix of math, history, art and film?

My father was an artist – a painter – and my mother, an actress. Beginning at age 6, I went to a music school for eight years. At age 14, my choices were math or music.

School math did not attract me any more than school biology or history – it was just another discipline. But my math teacher in the sixth grade spent four Sundays taking me to the Moscow University Mathematical Olympiad. Our school was Monday through Saturday, so she accompanied me to the competition during her only free time. The competition didn’t test practical knowledge; it gave you an opportunity to show your creativity. After that, the choice was easy for me: mathematics’ fun puzzles vs. music, which by then I knew was slave labor with never a day off. My parents were displeased at first. By ninth grade, I went to a magnet math school but I continued with music school so if I wised up, my hands would still be ready to play an entrance exam for music college. Later in high school, my main interest shifted to visual arts. I am an artist at heart, and treat mathematics as an art as well.

In Moscow, I didn’t like the lack of human rights and I didn’t like that my life was predetermined to my tombstone. But by 1988, I began to feel that once again I was pigeonholed in the College of Engineering. I rebelled a little bit and moved to arts and sciences. I applied for a Colorado Endowment for the Humanities grant to focus on Russian studies and to my disbelief, I got the grant. I brought together professors from Boulder, the Colorado Springs campus and Colorado College to talk about things like Soviet-American relations, Russian history and Russian literature. I talked about one of my greatest passions – Russian Avant-Garde of the Early 20th Century. After that, I was asked about teaching a course for the art department.

My first art course was in ’89 and I have been teaching art since. A week ago, my course on “Emergence of Infinity in Arts and Sciences” was approved. It’s an interdepartmental course and on May 8 will be considered by a campus-wide committee as a course that counts for every major on our campus.

3. You founded the Colorado Mathematical Olympiad at UCCS, and the 32nd event just wrapped up last week. Why did you start this competition and what is its mission?

I was a straight-A student. It was easier to get all A’s than explain to my mother why I got a B. And only the Moscow State University Math Olympiad showed me the beauty and humor of mathematics. Somebody created the Olympiad for me and now I am passing the baton to the next generation. Previous winners of my Olympiad are now professors at Penn State, Ohio State (both in math), the University of Southern Cal (philosophy and law) and Berkeley (astronomy).

The mission is to show the kids – and society – that achievement matters not only in football. And to tell individual kids that they have the talent – they just must develop it and contribute to the culture. The Ohio State professor, Mathew Kahle, was a C- student at school; he needed me to tell him that he was good. He won the Olympiad for two straight years. The Berkeley professor, Aaron Parsons, came from Rangely, Colorado, which is not exactly a place famous for top education, but he won first prize in the Olympiad and was accepted by Harvard and then Berkeley.

I created the Colorado Math Olympiad in 1983-84. I actually wanted to create it the moment I came here in 1979, but there was no enthusiasm from my fellow mathematics professors. In ’84, I asked my number theory students if they would like to join me in creating this and about 75 percent of my students volunteered.

The years have been a rollercoaster. There were times when I had to fight deans for the survival of the Olympiad, but my current chancellor is a strong supporter. We had about 330 students compete this year, and for the first time, a girl won first prize. Sarah Gao is an eighth-grader. This is amazing because the questions are the same for all middle-school and high-school competitors. Another girl, Anjalie Kini, also an eight-grader, won second prize. This was really a transformative year. Their work was excellent. The judges don’t know who the authors are; we grade the papers under code, and so it was a delight to see the girls do so well. This is also only the second time in 32 years that a middle-school student has won first prize. It’s very exciting.

4. Your new book, “The Scholar and the State: In Search of Van der Waerden,” was released a few months ago. Why did you choose Bartel Leendert Van der Waerden as a subject?

Lots of books are written about heroes and villains, but the majority of people are in between. And so I chose an ordinary person, even though he was a great mathematician, and traced how the Nazi tyranny forced him to accept compromises with his conscience, as did his famous friend, Werner Heisenberg, who won the Nobel in 1932 and later was the scientific head of Nazi atomic research.

In 2009, my book “The Mathematical Coloring Book: Mathematics of Coloring and the Colorful Life of its Creators,” was published. In all, Springer – the publisher – signed 10 book contracts with me. Seven books are out, and one of the other three will be my memoir, “Memory in Flashback: A Mathematician’s Adventures on Both Sides of the Atlantic.”

I have written more than 300 articles and 11 books, but “The Mathematical Coloring Book” and “The Scholar and the State,” which took 18 years and 20 years respectively to write, and the Colorado Mathematical Olympiad are the most important things I have done. I can say this is why I was born to the world. Most mathematicians and historians write very boring scholarly books: It’s all theorem-proof, theorem-proof. I like my books more in the style of Sir Arthur Conan Doyle: I’m Sherlock Holmes and I invite you, my reader, who is Dr. Watson, to join me and investigate something. I use the first person unapologetically because I don’t think there is anything in this world that is really objective. I believe in perspectivism as Nietzsche defined it: We don’t have a fact; we have various perspectives on that fact.

5. Do you have an object or artifact that is special to you?

In my office, I have two of my father’s – Yuri Soifer (1907, Vinnitsa, Ukraine – 1991, Colorado Springs) – paintings. One is a Jewish cemetery that used to be his set design for a 1928 play in Odessa, and the other is his abstract work, “Electronic Music.” In 1972, in Moscow, I found a couple of my father’s small set designs in his portfolios. I loved them so much that I asked him to enlarge them and make them into large graphic art. So, the cemetery hangs in my office, and the other one, “Smiling Through the Tears: Sholem Aleichem” (the author of “Fiddler on the Roof”), is sitting on my late father’s easel in my home studio, which I built for him with my own hands in 1982 (I did not yet write books then, so I had the time to build).