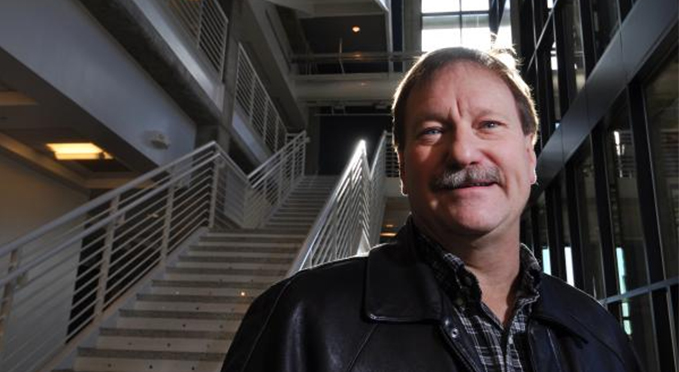 After working for nearly 17 years at Dow Chemical in Michigan, Alan Weimer thought about moving into academics.

“The fun went away in industry,” he said. “The global economy hit in the late ’80s and early ’90s and large companies like Dow focused on making easy money by building existing technology plants overseas instead of inventing new technologies at home. I wanted to go into academia to get the fun back by inventing things and working with students instead of working to improve a company’s bottom line.”

He knew a few faculty members at the University of Colorado, and he asked them for letters of recommendation. They asked him to apply for a position at CU. Some 17 years after receiving his Ph.D. at the university, he returned as a faculty member. 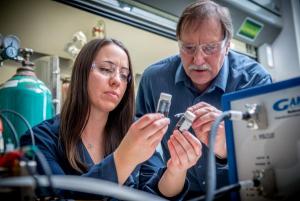 Alia Lubers and Alan Weimer compare carbon inks to use in a hydrogen fuel cell.

Weimer, the H.T. Sears Memorial Professor of Chemical Engineering, directs a research team working with nanomaterials and solar thermal chemical processes. He has received numerous awards over the years and his and his team’s research has spawned two companies. He also is an adjunct professor at the Australian National University (ANU) in Canberra and is currently there on sabbatical, doing research.

“It is clear that my industrial experience has had a big impact on my university teaching and research,” he said. “I think it’s a mistake that almost no industrial scientists are hired into academia as they have unique experiences that will benefit academics. My hiring at CU was a fluke and it happened at the right place and at the right time.”

1. One area of your research is solar thermal water splitting to produce renewable hydrogen. What has been the outcome of this work?

My research group has been developing active materials and solar thermal processes to split water. We carry out a cycle of two chemical reactions in which we produce oxygen and then hydrogen separately from water using an active material that first gives up oxygen when heated and then picks that oxygen back up when exposed to steam, releasing hydrogen. The keys are that the active material needs to be robust and do this forever without deactivating, and the chemical processing system that allows concentrated sunlight to do this is highly efficient.

My research group is the largest academic research group in the United States for this research and has a unique facility here at CU for carrying out the studies. This is the “holy grail” for a truly renewable hydrogen economy: use water and sun to get hydrogen and then react the hydrogen with oxygen to get electricity and the water back. It won’t be commercialized any time soon because of low natural gas prices and no imposed cost on carbon emissions, but the potential is incredible. This can be used to drive fuel cells, both stationary and in vehicles.

2. ALD NanoSolutions is a company that is an extension of your lab’s research on atomic layer deposition.  What did the research find and what is the outcome?

At CU we discovered that one could functionalize and coat individual particles by atomic layer deposition (termed Particle ALD), including nanosized particles, without gluing those particles to each other. We then developed a chemical process for doing this at large scale. Broad patents were eventually obtained and the company was initially founded as a way to bring research funds into my lab since government agencies did not originally support the work.

Nearly 10 years after patents were filed, skeptical academic scientists were questioning me at major research conferences as to how this was even possible to do since forces between particles will tend to hold those particles together, making the coating of individual particles impossible. We published a series of papers to explain this. Today, the scientific community has bought in and the industrial world has taken note. This is the lowest-cost process to make particles of this kind with a nanofilm since almost no chemicals are wasted in the process.

Two of the most beneficial and cost-effective applications are in protecting LED-based active particles from deactivating in the presence of moisture and allowing Li-ion battery materials to charge and discharge many more times at high energy than they could without the films (improving lifetime). For the LEDs in particular, one can achieve the same brightness for ALD-coated materials using maybe 75 percent to 80 percent of the energy required as one would using the competing method for protecting the active materials. It is a huge energy saver and has a substantial performance-to-cost benefit. I think we will see both of these applications commercialized extensively over the next few years. Many others will follow.

I’m proud of the fact that we have been able to develop a “platform technology” with many applications from the basic science research in a university lab. ALD NanoSolutions is the commercial technology leader and employer of many CU students who developed this kind of research in the lab.

3. What other research or areas of study interest you?

My interest has always been to try and be first in a field knowing that funding might be difficult as one has to crack the barrier of skepticism (i.e. being told “it can’t be done,” so, “no funding for you”).  I consider that an incredible opportunity if I understand the fundamental scientific aspects well enough to know in fact that it can be done. I try to avoid crowded fields like photovoltaics, fuel cells and even batteries. I think that there is a lot of opportunity in advanced ceramic materials for chemical engineers with applications in nuclear engineering, 3-D printing, water purification and even cement – clearly an area with not much research going on.

4. You have won numerous awards and have numerous achievements. Is there one or two for which you are most proud?

This is probably surprising to readers: I’m most proud of being named Distinguished Alumnus of my high school back in Youngstown, Ohio, and being able to present at their “Honors Assembly.” That plaque sits at the top of my wall, and yet this kind of recognition is not normally included in a professional resume.

My father had an eighth-grade education and worked as a laborer for U.S. Steel in Youngstown. My mother was a stay-at-home mom. I was 11 or 12 years old when my father was laid off in the mid-1960s.   He then worked three part-time jobs to make ends meet until he finally landed as a truck driver. I will never forget the despair that set in. Although he never had the education himself, he always told me that the path to success – “The American Dream” -- is through hard work and education. When I look at that plaque, I remember him and what he went through to provide for us and the motivation that he instilled in me to succeed.

5. Do you have a favorite item or artifact that you keep in your office, and if so, what is the item and what is the story behind it?

There is a photo of me standing beside a unique chemical reactor at the Dow Chemical Company and an insert in the photo of the building that housed that reactor. I spent 10 years of my Dow career having the honor to work with a great group of scientists and engineers and to have been able to invent that process from a concept – a lab curiosity, through process development, and finally to a commercial plant.

I was almost let go by Dow because I was a maverick and a nonconformist employee, but at the end of the day, I can say that I gave back to Dow more than I took. That unique reactor development was one of those incredible opportunities where I was told a number of times that it wouldn’t work, but I knew it would because I understood the fundamentals, and in the end it did!