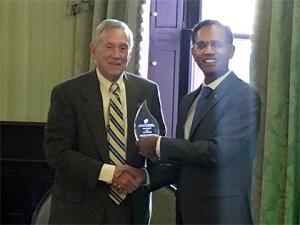 Regent Steve Bosley was among the honorees of the Faculty Council at this month’s Faculty Senate meeting, where the outgoing board member appeared to offer his thoughts as he nears the end of his 12-year tenure.

In addition to the council’s resolution of Appreciation for Service, the governance group also awarded three other distinctions during the Dec. 1 meeting at Denver’s Brown Palace Hotel:

The resolution honoring Bosley noted how he brought his years of business experience – in banking and as founder of the Bolder Boulder – to the board in many roles, including board chair and presidential search committee chair. The council credited him as a “thoughtful bipartisan support of shared governance and faculty issues.”

“Whenever you deal with Regent Bosley, he makes you feel good. He’s always inviting and welcoming. He is a statesman for CU,” said Faculty Council Chair Ravinder Singh. “I really value what you have done.”

Bosley told the group, “It has been a great privilege serving this university. I couldn’t be prouder that I supported the shared governance principle. … Thank you for letting me be a part of it.” 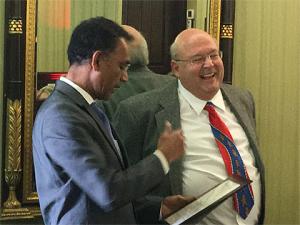 Malone, a past chair of the council, echoed thanks for Bosley’s service.

“I want to thank you for your persistent ability to go tell our story,” Malone said. “You’re a good model for anyone trying to really tell a positive story about this university and help people understand the intricacies.”

Malone received his award in recognition of his 30-plus years as a faculty member, as well as leadership on the council, which he served as chair for four years. He has served on virtually every Faculty Council committee, and is currently chair of its communication committee. 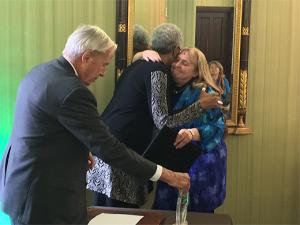 Allen was honored for serving with distinction as a faculty member for over 25 years, during which she “has worked tirelessly to promote, sustain and enhance a culture of inclusiveness contributing to the success of all faculty, staff and students.” An advocate and ally for underrepresented members of the university community, she is author of the widely cited book “Difference Matters: Communicating Social Identity.”

Sauve was recognized for exceptional management of council business, including fostering connections with senior administrators, staff and external stakeholders. Her expertise contributed to the success of faculty, staff and students by coordinating professional development events such as CU Women Succeeding.

President Bruce Benson presented the three awards (Sierra Swearingen of CU Boulder accepted on behalf of Sauve, who recently took on a new role at CU Anschutz) before addressing the Faculty Senate and taking questions from those in attendance. Looking ahead to 2017, he said he is encouraged by Gov. Hickenlooper’s proposed budget, with its recommended increase in funding for higher education. He said recruitment and retention of diverse populations of students, faculty and staff will remain a focus.

“We’re going to continue to work hard on diversity – and it’s all kinds of diversity we have to talk about,” Benson said.

Allen said she feels CU can be more strategic and focused in its pursuit of increased diversity. “There really are best and most promising practices … that we haven’t had the resources to take on.”

Kathy Nesbitt, vice president for employee and information services, and leader of a team working to define the newly created vice president for diversity, inclusion and retention, said the university community must work to create an inclusive climate and environment.

“We have to focus on changing the climate to make it a more welcoming environment,” Nesbitt said. “It does take time and we have to work collaboratively to get that done.”

Nesbitt said it’s likely an outside consultant will be employed to assess how CU works across the system in order to best define the new vice president position.

In other business at this month’s meeting: