Children and teens who participate in Colorado Shakespeare Festival School of Theatre classes might call them fun. After all, who wouldn’t enjoy a workshop titled “Hurling Insults,” “Oh, I am slain” or “Stage Combat”? Sign me up.

What these young people, ages 10 to 18, may not realize is that while they are learning about acting and William Shakespeare’s plays, they also are expanding their brain power and building empathy. 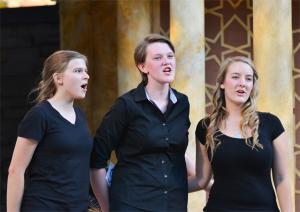 “The wonderful thing about Shakespeare’s plays is how complicated they are. They are big stories and contain big characters and it takes some intellectual ability to understand who is talking and how that person is related to another person,” said Amanda Giguere, director of outreach for the Colorado Shakespeare Festival (CSF). “To perform a Shakespeare play, to use his language, increases a person’s own linguistic ability.”

The CSF School of Theatre was founded in 2011 and offers after-school and weekend classes year-round, as well as intensive, three-week summer camps. Classes are limited in size, enabling a more personalized experience for students, who are taught by CSF company actors and experienced graduate students.

Giguere said because children’s brains and vocabularies are flexible, it is easier to enhance learning through complicated language and concepts. “Adults might have cultivated a fear of Shakespeare that began when they were young, but kids seem more open to speaking the way Shakespeare spoke.” 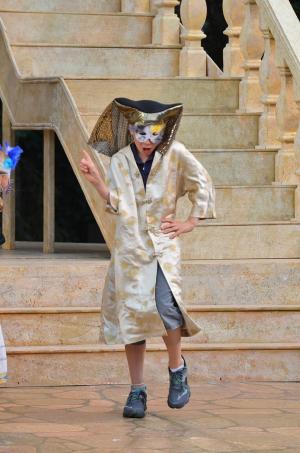 Interacting with one of the Bard’s plays also helps create and foster empathy.

“It gives people the ability to see how many different viewpoints can exist in the world. In a Shakespeare play, you have 16 to 20 characters who all have unique needs and wants and desires and express themselves in different ways,” Giguere said. “Students who perform in a play like that step into someone else’s shoes and understand a character’s motives, and that encourages the kind of mental flexibility and intelligence we don’t often use.”

One teacher whose students participated in a previous class wrote in a survey, “My students (all second language learners of English) learned so much more about language, literacy, collaboration and theater … It was a wonderful experience and gave them a boost in their self-confidence as well.”

Classes change every year and are announced in November. Giguere said the school responds to participants’ requests but also puts out a call to educators for class suggestions.

Depending on the class choice, students may learn and perform a famous play, write their own Shakespearean masterpieces, learn the art of speech-making in Elizabethan England, or are educated in the finer points of that era’s stage production.

Previous classes or single-day workshops have included other creative experiences. In one, students learned all about Shakespeare’s finesse with verbal affronts. During the final performance, parents were called up to the stage and their offspring showed what they had learned.

In the “Oh, I am slain” class, students learned about the deaths of some of Shakespeare’s most famous characters then enacted those scenes.

One makeup workshop taught the students how to create cuts, bruises, scrapes and burns; another taught participants how to invent creatures using paint and other theatrical products.

“Anything related to Shakespeare is going to be larger than life and asks you to be a bit operatic and bigger than you normally are in your daily life,” Giguere said. “That is so important to kids because they are so attached to their cell phones and other small devices, but Shakespeare helps them stretch their bodies, voices and imaginations.”

Using voices and movement in a dramatic way also is important for adults. Last spring, the school offered its first adult acting class, which was a popular move. Another adult class currently is in session, and Giguere said similar classes likely will be offered in the future.

For more information about the school or upcoming classes, visit http://www.coloradoshakes.org/education/csf-school-theatre. Tuition scholarships are available.