Darrell Stevens, Office of Advancement, is the recipient of the President’s Employee of the Year Award. He received the recognition and appreciation of exceptional job performance, which includes a $1,000 award, during a Tuesday ceremony presented by System Staff Council at 1800 Grant St.

A graphic designer for advancement operations based in the Broomfield office, Stevens works on more than 100 marketing, stewardship, engagement and strategic fundraising projects annually.

Among other testimonials in his nomination were: 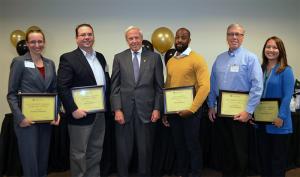 System Staff Council also recognized the other nominees for the President’s Employee of the Year Award:

Calvin Anderson, director of financial systems, Office of University Controller. He was involved with the launch of PeopleSoft 9.2 and leads a team responsible for ensuring finance and reporting systems support the requirements of system and campus controllers. From the nominators: “For many years now, Cal has been our ‘go-to guy’ when a report doesn’t tie out or some transaction processed incorrectly as he can quickly research this issue, diagnose the cause, and suggest and help implement a remedy.”

Denise Nakamichi, customer relationship manager, Procurement Service Center. She manages PSC events at all campuses, ensuring value in shows and forums for a broad range of internal and external stakeholders. From the nominators: “Denise is someone who is admired by her colleagues for her hard work and dedication, as well as her upbeat and positive attitude.”

Amar Tekriwal, senior software engineer, University Information Systems. He is responsible for building and maintaining data connections between core UIS systems and for connecting those systems with those at the campuses. From the nominators: “Amar is a stellar employee who continually goes above and beyond his job duties in order to ensure the best possible outcomes for his customers and UIS.”

Alan Vidmar, assistant director of enterprise content services, University Information Systems. He started at CU 25 years ago as a work study employee in housing, then the library, then financial aid. He joined UIS as part of the CUSYS implementation. From the nominators: “Alan has a passion for process improvement, which I believe is a product of his many years on campus, both as a student and a longtime employee.”

Kimberly Wendelin, records manager, Employee Services. Her responsibilities include records management for all past and current employees, department administration of the OnBase records management application and much more. From the nominators: “She is adaptable, flexible and inclusive in these roles and consistently demonstrates a willingness to assist others contribute to the team’s efforts and goals.”

Also recognized was nominee Paula Manzanares, professional assistant to HR in Employee and Information Services, who passed away this week after a battle with cancer. She was described as “completely accountable, unfailingly dependable, uncompromisingly ethical and consistently courteous.” President Benson led a moment of silence and also recalled a recent phone call to her.

“She was always positive, always upbeat,” he said. “We’re going to miss her a lot.”

Those marking milestones are: 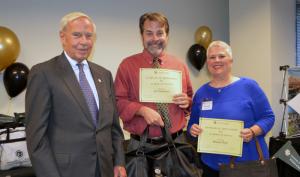 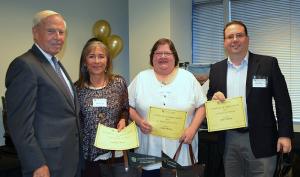 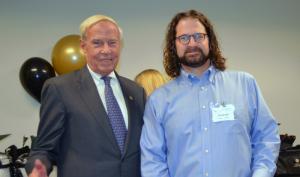 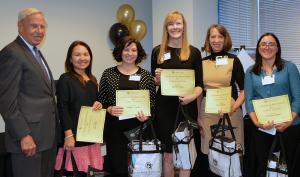 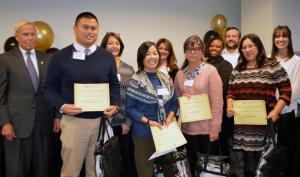 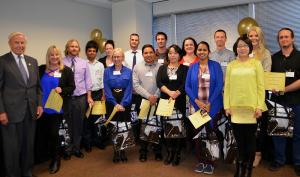