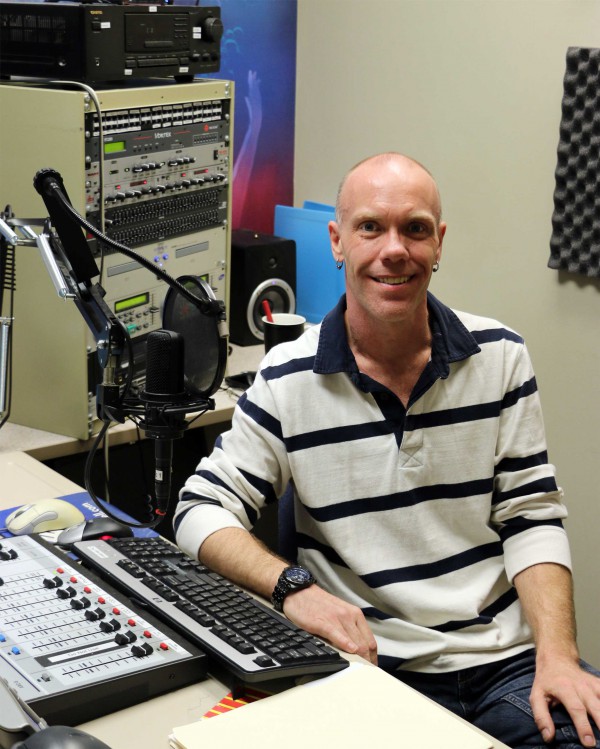 With six years’ experience as a radio DJ prior to joining UCCS, Sloan’s excited to be behind the microphone again. “I started off in radio working behind the scenes on the technical side,” Sloan said. “Once I got my own show and found my radio persona, I fell in love with it.”

Sloan previously worked with UCCS Radio as a volunteer. Following the September 2013 death of Margaret “Marge” Mistry, he took over as the fulltime adviser. According to Sloan, Mistry’s work set UCCS Radio up to move forward.

“Marge was everything to us,” Sloan said. “She set up a lot of great partnerships across campus and really gave us a lot of momentum.”

Sloan hopes to keep the momentum alive with a number of projects designed to increase the program’s visibility, including installing radio boxes around campus that are capable of streaming UCCS Radio’s online format, adding more faculty and staff programs, acting as DJ for more events, and potentially broadcasting over the air.

Sloan can be heard on UCCS Radio during “Office Hours With Ben” on Tuesdays and Thursdays from 11 a.m. to 1 p.m.

UCCS Radio started in 2003 as a project undertaken by the UCCS Chapter of the ACM, the Computer Science Professional Association. The establishment of the radio station was made possible by a grant by the UCCS Technology Fee Committee. In 2005, the UCCS Internet Radio Station became an official organization within the College of Letters, Arts and Sciences. The Internet Radio Station has an associated Student Club that performs many of the activities needed for day-to-day running. The club receives support from the College of Business, College of Letters, Arts and Sciences, College of Education, School of Public Affairs, Beth-El College of Nursing & Health Sciences, and Ent Federal Credit Union.

For more information or to listen, please visit radio.uccs.edu.