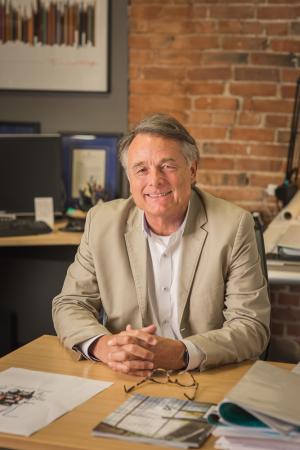 A passionate weaver of urban fabric, Shears leads in expanding the possibilities of planning, zoning and design to catalytically transform cities and how people live in them. Working with city officials for more than 30 years to expand established entitlements while engaging communities and stakeholders, Shears specializes in creative interpretation of zoning ordinances and design standards to achieve economically sound contextual solutions.

“Chris Shears is a proven, world-class architect whose work in Denver, Boulder and other cities is truly visionary,” Benson said. “We’re very pleased that he’ll be sharing his invaluable perspective as a member of CU’s Design Review Board.”

The DRB, which is the second-oldest established academic and higher education review board in the country, guides the planning and design of all four CU campuses according to their respective master plans, planning and design guidelines, and the specific development program.

Shears’ sensitive infill and transit-oriented design in Denver’s LoDo and adjacent neighborhoods encompasses over $1 billion of development. His planning, zoning and design precedents have expanded urban architectural opportunities for the entire profession.

Shears was recognized for successfully championing urban density long before founding his present firm 15 years ago. Shears undertook significant urban projects, maintaining involvement throughout the design, documentation and construction process. In 1997, when Shears was commissioned to resurrect a derelict LoDo parking structure property, he instead proposed and designed Denver’s first newly constructed LoDo residential loft project, Palace Lofts, setting in motion unprecedented enthusiasm and opportunity to live and work in the historic district that continues to grow through the present.

Shears’ new contextual design, adaptive reuse and insightful civic leadership have stabilized and transformed similar neighborhoods in his hometown of Boulder, as well as Ithaca, Kansas City, San Diego and Bentonville, Arkansas, creating a proven base for client and civic success.