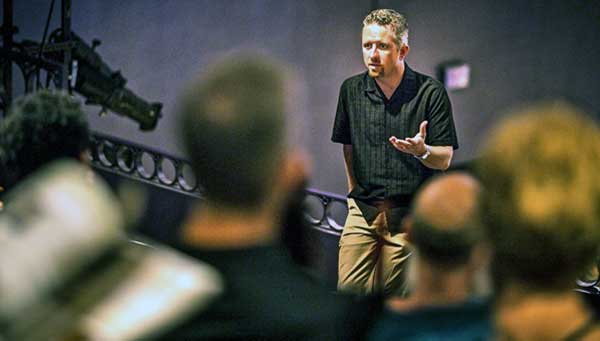 Timothy Orr has been hired as the producing artistic director of the Colorado Shakespeare Festival at the University of Colorado Boulder. Orr has served as interim director since February 2013 and was hired at the conclusion of a nationwide search for a permanent director.

Orr has been with the Colorado Shakespeare Festival as a performer since 2007 and joined the staff as the associate producing director in 2011. Steven R. Leigh, dean of the College of Arts and Sciences, which oversees the festival, said Orr was selected from an “outstanding” pool of applicants.

The Colorado Shakespeare Festival is a professional theater company under the auspices of CU-Boulder. It was launched in 1958 and is one of a relative few companies to have performed the entire Shakespearean canon. It is the second-oldest U.S. theater company dedicated to Shakespeare.

On Orr’s watch, ticket sales for the 2013 season rose nearly 10 percent from 2012, and revenue was up by 18 percent. It was the first time ticket sales had increased over the previous year in five years. Also in 2013, CSF produced its first profitable season since 2006.

So far this year, advance ticket sales are double those of this time last year.

Orr also raised $75,000 to replace the decades-old and sometimes-failing stage lights in the Mary Rippon Outdoor Theatre. The new energy-efficient lights will cut electricity use by 25 percent and will enhance CSF’s artistic capabilities.

During his tenure at CSF, Orr started the CSF School of Theatre, which offers camps and classes for children and extend CSF’s reach into the community. He also launched CSF’s nationally recognized Shakespeare anti-bullying school tour, which has been seen by more than 46,000 children and featured on “PBS NewsHour.”

Orr is committed to CU undergraduate students. He plans to raise by 50 percent the weekly stipend of the acting interns this summer, who are drawn from the Department of Theatre and Dance, from $100 per week to $150 per week.

Orr holds degrees in music and arts management from California State University, Sacramento, and an MFA in theater from the University of California, Davis, and was a fellow with the League of American Orchestras. As an actor, he has appeared in 10 productions at CSF and also at numerous theaters across California.

In its 2014 season, which begins June 6 and runs through Aug. 10, the Colorado Shakespeare Festival will perform “The Tempest,” “Henry IV, Part 1,” “Henry IV, Part 2,” “The Merry Wives of Windsor” and “I Hate Hamlet.”