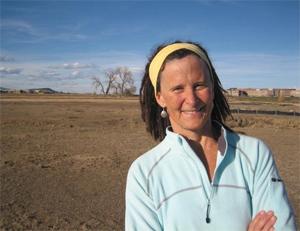 The chair of the University of Colorado Boulder history department on Monday won the Pulitzer Prize for history for her book Encounters at the Heart of the World: A History of the Mandan People.

Associate Professor Elizabeth Fenn said she first learned of the prize when she received an email from a New York Times reporter. A short while later, she received official notification from her editor. In the meantime, her phone started ringing and people started showing up at her office door.

Fenn worked on the book for 10 years.

“The book is a history of a remarkable Plains Indian tribe known as the Mandan people, who had villages in what is today North Dakota.” she said. “They are most widely known as the people Lewis and Clark stayed with in the winter of 1804-05.

“They had to deal with a whole series of environmental challenges — drought, infectious disease from Europe including whooping cough, smallpox and measles, and they also had to deal with Norway rats, a new species from China arriving via Europe,” she said.

The Pulitzer judges called her work “an engrossing, original narrative showing the Mandans, a Native American tribe in the Dakotas, as a people with a history.” The prize includes $10,000.

Fenn specializes in the early American West, focusing on epidemic disease, Native American and environmental history. Her 2001 book Pox Americana: The Great Smallpox Epidemic of 1775-82, unearthed the devastating effects of a smallpox epidemic that coursed across the North American continent during the years of the American Revolution.

She is now at work on an expansive biography of Sakagawea, using her life story to illuminate the wider history of the northern plains and Rockies. Fenn is also the co-author, with Peter H. Wood, of Natives and Newcomers: The Way We Lived in North Carolina before 1770, a popular history of early North Carolina which appeared in 1983.

In a 2012 story highlighting Fenn in Colorado Arts and Sciences Magazine, Susan Kent, previous chair of CU-Boulder’s Department of History, said the hiring of Fenn and Thomas Andrews further broadened key strengths in the history department. Along with cultural environmental historians Phoebe Young and Paul Sutter the department is now a “powerhouse,” Kent said, adding:

“It’s an extraordinary lineup, and enables us to position ourselves as one of the premier institutions in America for the study of environmental and Western/borderlands history.”

The Pulitzer Prize finalists in the history category were “Empire of Cotton: A Global History” by Sven Beckert and “An Empire on the Edge: How Britain Came to Fight America” by Nick Bunker.

Stepping back in time to the Virtual Immersive Global Middle Ages