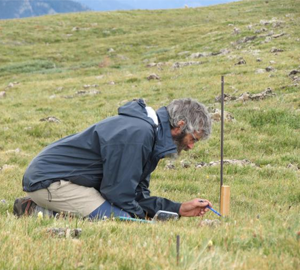 Daniel Doak has been appointed the University of Colorado Boulder’s first Colorado Chair in Environmental Studies. Doak is a conservation biologist known for his quantitative analysis of how different government policies could affect the populations of species such as sea otters, California condors, corals and rare plants.

The endowed chair in environmental studies was made possible by $4 million in gifts made anonymously in 2009 and 2010 toward the chair.

Sharon Collinge, professor and director of the CU-Boulder Environmental Studies Program, called Doak a perfect match. “He epitomizes what we’re looking for,” she said.

Doak is especially skilled in interdisciplinary research, and brings expertise in policy to his analyses of risks of energy development. And he is widely cited for his research in quantitative conservation biology, which combines sophisticated computer modeling with varying policy scenarios to project changes in populations of rare species.

For instance, the Proceedings of the National Academies of Science recently published a study co-authored by Doak concluding that the California condor is chronically endangered by lead exposure from hunters’ spent ammunition.

While the free-flying condor population has risen in the last three decades, that increase has been achieved through captive breeding, monitoring and veterinary care, the study found. Meanwhile, the primary threat to the endangered bird -- lead poisoning from bullets and shotgun shells lodged in carrion -- has gone largely unmitigated, the study said. Doak and his fellow researchers found no evidence that California’s 2008 partial ban on lead ammunition yielded any decrease in lead exposure and poisoning in condors.

Since 2007, Doak has served as a professor of zoology and physiology at the University of Wyoming. Previously, he was a faculty member at the University of California, Santa Cruz. His research has been funded by the National Science Foundation, U.S. Fish and Wildlife Service, U.S. Forest Service, California Department of Fish and Game and the U.S. Bureau of Land Management. Scholarly papers have cited his work more than 3,000 times since 1998.

Doak said he was drawn to CU-Boulder’s Environmental Studies Program because of its breadth, spanning disciplines ranging from biogeochemistry to political science to philosophy. This interdisciplinary focus is necessary to confront some of the world’s most intractable problems, Doak said.

Working with experts from a wide range of disciplines, Doak added, provides a motivation and opportunity “not once a year but every day to confront your own ignorance and thus to appreciate and learn new ideas and approaches.”