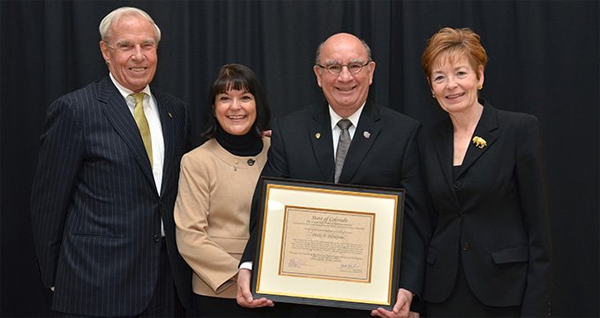 Staff who have given decades of service to the University of Colorado Boulder were honored May 6 at the 38th Annual Years of Service banquet, and the event provided the perfect opportunity for a surprise celebration of Chancellor Philip DiStefano’s 40 years on the Boulder campus.

The chancellor began his career in the School of Education in 1974, becoming a full professor and then dean. He was named provost in 2001, and after two periods as interim chancellor, stepped into full-time service in the role in 2009.

Each year, Chancellor DiStefano speaks at the banquet, and his remarks this year reflected on his history on the campus, and the integral role that staff play in making the campus a success. Reflecting back to the historic flooding in September he said, “I’ve often said that staff is the backbone of the university. That showed in very dramatic fashion with last fall’s floods.” He continued, “One of the Flagship 2030 initiatives is supporting the mission and you are all champions at that -- supporting education, research, creative work, service and operations.”

Boulder Campus Staff Council - along with campus leadership and the Office of the President - took advantage of Chancellor DiStefano’s presence at the banquet to put together the surprise tribute.

University of Colorado President Bruce Benson, along with his wife Marcy Benson, took to the podium to thank the chancellor for his service. In his remarks, President Benson said, “Phil DiStefano has positioned CU-Boulder as a leader in STEM education. His vision and leadership are part of why our academic reputation is so strong.”

Marcy Benson then read a tribute from the Colorado Legislature, sponsored by state Rep. Dickie Lee Hullinghorst and state Sen. Rollie Heath. The resolution reads in part, “Philip P. DiStefano has distinguished himself, the state of Colorado and the institution of higher education by serving the University of Colorado Boulder for 40 years as professor, dean, provost and chancellor. He has championed student success, overseen research revenues that have grown to $352 million annually and led a world-class campus with five Nobel laureates and eight MacArthur Fellows.”

The Bensons also honored Yvonne DiStefano for her 40 years serving the campus alongside the chancellor. The DiStefanos’ twin daughters presented each with a pin celebrating their contributions, and the Bensons presented the chancellor with a framed copy of the Colorado Legislature’s tribute.

The Years of Service banquet is an annual tribute to recently retired and long-serving members of the Boulder campus staff, and provided an excellent venue to celebrate one of the campus’s most tireless champions.