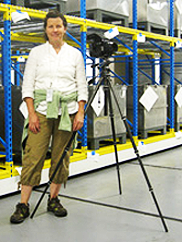 The works of Joann Brennan – a photographic artist, professor and associate dean in the College of Arts and Media at CU Denver – hang in many museums and galleries. The latest exhibition to include her images runs through Feb. 22, 2015, at the Smithsonian American Art Museum in Washington, D.C.

“The Singing and the Silence: Birds in Contemporary Art” is a showcase of a dozen contemporary artists including Brennan. Five of Brennan’s photos were selected for the new Smithsonian exhibit, but these images are not what one might expect. They are bird specimens that she photographed at the Denver Museum of Nature and Science.

While honing her skill with the camera, Brennan was drawn to nature and landscapes. Some of her inspirations for studying human interactions with wildness and zoological specimens evolved from reading Rachel Carson’s “Silent Spring” on the environmental impact of pesticides. The book helped to spark the environmental movement in the 1960s.

“Remember, it was a museum collection of raptor egg specimens that solved questions about the chemical DDT as the cause of declining raptor populations in the United States,” Brennan said. “That’s the value of maintaining zoological specimens. They could be the missing link to solving critical environmental and human issues that might occur in the future.”

Brennan has been asked if her work is more documentary than art. “It is both,” she said. “My photographs are a bridge, a vehicle to create and share stories that expose nuances and the paradox of our complex relationship to wildness and the natural world.” She knew early in her career that commercial photography was not her calling. Storytelling through the descriptive and interpretive lens of photography was her passion.

Brennan’s professional ties to the Smithsonian began in 2010 when she was selected for a Smithsonian Artist Research Fellowship. It’s a competitive award given to accomplished national and international artists. She is also a Guggenheim Fellow, having received a Guggenheim award for her photographic work in 2003.

Brennan has agreed to serve as CU South Denver’s associate vice chancellor for academic affairs, reporting to the provost. She will provide oversight and leadership for the academic programming at CU South Denver and ensure delivery of high-quality academic programs there. Her immediate focus will be encouraging program development for Spring 2015 from all four CU campuses.