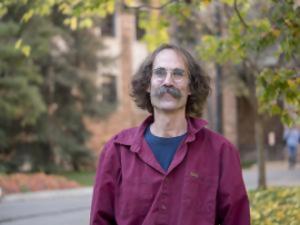 The advertisement for the assistant professor position at the University of Colorado Boulder seemed like it was written with Liam Downey in mind.

“I thought I could get the job, and sure enough, I did. CU was looking for exactly what I did,” he said.

That was in 2003, and at the time, Downey was an assistant professor at East Carolina University but he wasn’t happy there and wanted to move west again. He had lived for a time in Santa Fe, New Mexico, before moving to Ann Arbor, Michigan, to earn a master’s degree from the School of Natural Resources and Environment at the University of Michigan.

Last August, his book, “Inequality, Democracy, and the Environment,” received the Environment and Technology Section’s Allan Schnaiberg Outstanding Publication Award at the American Sociological Association annual meeting. Colleagues at the Seattle meeting said his book makes a critically important contribution to environmental sociology and moves the field forward in new and exciting ways.

1. Your award-winning book, “Inequality, Democracy, and the Environment,” argues that elite-controlled organizations, institutions and networks play a key role in creating social and environmental crises. How did the book come about and how do these entities create these crises? 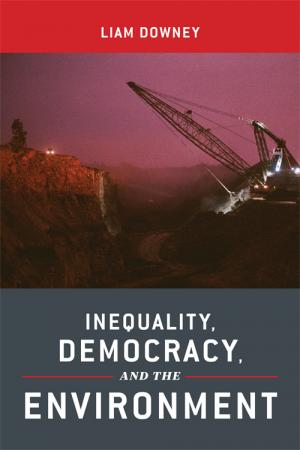 The book actually came about as a result of a graduate class on the political sociology of the environment that I taught on the topic about eight years ago. As I was putting the class together, I developed an argument that I was convinced I’d find in the literature, but I didn’t find it. By the time the class was over, I decided I wanted to do some research on the relationship between inequality, democracy and the environment, and ended up writing an article on the topic and one on a related topic. That’s when I decided to write the book.

One of the things I’m primarily interested in conveying in the book is that, in the United States, we often blame individuals for the environmental crisis. The argument is that if people would just change their purchasing habits, we could solve all of these environmental problems. The implication is that consumers are at fault and that they have the power to change things because by changing their purchasing habits, they will force companies to change what they do. But that is overly simplistic and inaccurate.

In the real world, consumers don’t have power over large companies. So in the book, I shift the focus away from average people to those in our society who have the most power, in particular to the people and organizations who make the major decisions that shape our lives.

My argument is that economic elites, because they are in the minority, have to dominate or control undemocratic organizations, institutions and networks in order to achieve their goals. And in the process of achieving their goals, they often end up hurting people, communities, society and the environment, whether they mean to or not. Essentially, controlling undemocratic institutions, organizations and networks gives elites the ability to monopolize decision-making power and shift environmental costs to less powerful people and groups. It also gives them the power to inhibit the development and dissemination of pro-environmental knowledge, values and beliefs and to restrict the ability of non-elites to behave in environmentally sustainable ways.

As an example, two of the more powerful organizations in the world are the International Monetary Fund (IMF) and the World Bank. United States policy in regards to the World Bank and IMF is shaped in many ways by economic elites in the United States, and elites, through the U.S. government, are able to shape IMF and World Bank policy. One of the main things the IMF and World Bank do is lend money to developing countries, but the money often comes with strings attached that force developing countries to adopt policies that harm the environment, and, in many cases, harm the people and economies of these countries too.

What I’m arguing is that, by dominating these (and other) organizations, the United States and economic elites in the U.S. are able to monopolize decision-making power in regards to the economic policies of developing countries, allowing them to shift environmental and social costs to the people of these countries.

2. Is there a solution to this issue and is there anything non-elites can do to influence policy making?

Solutions are difficult. The problem is that there are tremendously high levels of inequality both within the United States and around the world and these inequalities are what give elites the means to achieve goals that benefit them. So what this implies is that one of the key things that needs to be done to solve the environmental crisis is to drastically reduce inequalities in the U.S., in other countries, and between the U.S. and other countries. And that’s a tremendously difficult thing to do.

3. A new research project for you looks at the role violence plays in producing social order. What does the project entail?

I just wrote the first pages of the book I want to write on violence and social order. I’m excited about it and a little daunted, too.

One of the things I wrote about in the “Inequality” book is the role violence plays in producing environmental problems. I argue there that the extraction of natural resources, including oil, often is maintained through the use of violence. A couple of reviewers of the book said they liked my take on violence. So, after I finished the “Inequality” book, I began to think more about the issue.

In the United States, violence is all around us. Hundreds of thousands of women are raped and hundreds of thousands of children are abused each year, and many neighborhoods in our country experience a heavy police presence. The U.S. spends more on its military than any other country in the world, and since turn of the century, the United States has started wars in Iraq and Afghanistan that have resulted in more than a million deaths. At the same time, violence also is associated with the production of the goods we buy. Sometimes violence is used to move people to make way for mines that produce minerals that end up in our computers, for example, and sometimes the people that produce the goods we buy go on strike and the police or military are brought in to end the strike. In other cases, people are paid wages so low they experience severe hunger, which I argue is a form of violence.

Although violence is all around us, sociologists have paid very little attention to the possible role violence plays in producing social order. I think there are historical and theoretical reasons for this. In the mid-20th century, for example, some sociologists began to argue that social order is based on consent, saying that in any social system, the main reason people don’t rebel or try to change the system too drastically is that the government or economic leaders manufacture their consent. Other theoreticians argue that while violence used to play a key role in maintaining order, that shifted and social order is now maintained more by the way we talk and move and discipline ourselves.

I agree with these arguments, but I also argue that violence plays a critical role in producing social order. Sometimes, the role is direct, such as when police were used to control the protesters of the Dakota Access Pipeline.

Other times violence is implicated in discourse, bodily discipline and consent. For example, one of the main reasons I think so many Americans consent to the social order is that we’re able to buy a lot of inexpensive goods, and often goods are inexpensive because violence is involved in the production of these goods.

I hope the upcoming book and the one I just published will make some kind of difference, shape the way sociologists and students think and maybe even have some influence on the broader society.

4. Will the recent unprecedented presidential election and what follows play into your research in any way?

I’ve never studied elections, but like everybody else, I have certainly paid attention and will say that I’ve never seen anything like this. I think that what we’re seeing is the logical outcome of political and social processes that have been going on for a long time. The divisions in the country have become starker and starker, but they are not new. We have two major political parties and both favor the interests of economic elites. Democrats do more for the middle and working classes and the poor than Republicans do, but both parties get their money from economic elite and their policies tend to promote elite interests. It’s why both parties have promoted and supported free trade and globalization in the manner that they have. Trade agreements aren’t just about trade, they’re also about weakening national sovereignty and weakening the democratic rights of citizens who believe that their government should be able to draft policies for them.

But the way free trade agreements are written is that they create offshore legal venues where countries’ laws can be challenged outside the judicial system. For example, with the North American Free Trade Agreement (NAFTA), Mexican companies can sue the United States – not in U.S. courts but in NAFTA courts. If the company wins, NAFTA requires that the U.S. change its laws.

So both parties have favored economic elites and that means that the lives of the middle class, the working class and the poor are much more difficult than they have to be. Two of the presidential candidates, Bernie Sanders and Donald Trump, spoke to the real concerns of many Americans. But the political parties were taken by surprise by these candidates and I’m not sure if either party has learned the lesson it needed to learn from the election about the lives of poor, working-class and middle-class Americans. And if neither party has learned anything, we’ll see more of this in the future. The irony, of course, is that Sanders really did have the interests of working- and middle-class Americans and poor people in mind, but I’m not sure Trump really does.

5. Away from the university, what do you like to do?

I like hiking and playing music. My favorite part of the country is the desert and I love spending time there. I’ve played guitar for a good chunk of my life, except when my kids were younger and I was getting my Ph.D. I’m in a band and with my friends am recording an album of songs I’ve written, mostly rock ’n’ roll. The band plays some of my songs but we also play Bob Dylan, Tom Waits, the Stones and others.

I see a real connection between playing music and research. People don’t realize, and some researchers don’t admit it, but good research is a creative process. We create new ideas and connect ideas in creative ways, and then work very hard to determine whether our ideas are supported by the evidence. And that’s what playing music – at least rock ’n’ roll – is about. You try to create something and then work very hard to make it good.