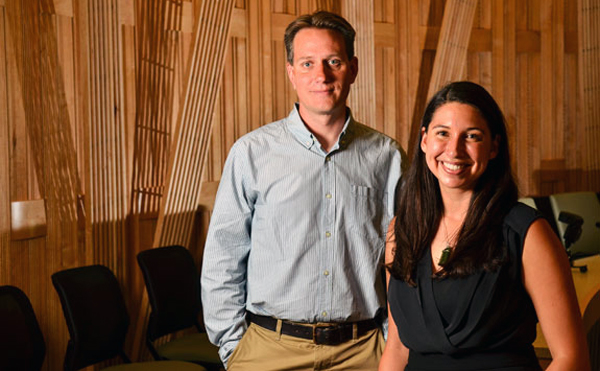 ZANETA THAYER: Room to teach and do research

Zaneta Thayer, Ph.D., finished her doctoral degree in anthropology last fall with impeccable academic credentials. She was considering various options when she saw a faculty position posted in the Department of Anthropology at the University of Colorado Denver.

Thayer earned bachelor's degrees in biology and anthropology at Dartmouth College and advanced degrees—master's and doctoral in anthropology—at Northwestern University. She didn't know much about CU Denver, but she loved it as soon as she interviewed here.

"I just really enjoyed my interview," said Thayer, who joined the Anthropology Department as an assistant professor in January. "I liked the people who would be my colleagues. They seemed very supportive. CU Denver struck me as a place that's transitioning toward a greater emphasis on research while also maintaining a strong commitment to teaching."

'Best of both worlds'

Thayer had been offered a research position at a medical school, but she wanted to also teach. She was impressed with the supportive environment at CU Denver compared with other departments where she interviewed.

"I thought I could get my work done here in a relaxed and friendly environment," she said. "The opportunity here gave me the best of both worlds—I wanted to be able to teach and do research."

Thayer is continuing her research into the intergenerational effects of stress. This summer she returned to New Zealand to continue studying an ethnically and socioeconomically diverse sample of women who were pregnant when the research began. Thayer has conducted epigenetic analysis of their children's DNA. What this allows her to see is whether maternal stress experience is associated with changes in the way offspring genes are turned on and off.

Also this summer, she collaborated with Maori (indigenous) health researchers at Whariki Health Research group to develop a similar study among Maori women in New Zealand.

Although only in her first semester at CU Denver, Thayer has already become a fan of the university's exceptional diversity. She is Mexican and American Indian (Lakota) and the first member of her family to earn advanced university degrees; her older sister was the first in the family to earn a bachelor's degree. "I paid my way through college, so I have a lot of respect for the students at CU Denver who are also having to do that," she said. "I appreciate the opportunity to work with such a diverse student body."

Having grown up on a farm outside Sacramento, Calif., and attending high school in western Oregon, Thayer said she's glad to be living in the West again.

Thayer has taken advantage of our consolidated university by collaborating with the Division of American Indian and Alaska Native Programs in the Nighthorse Campbell Native Health Building on the Anschutz Medical Campus. Through that resource, she learned about and secured a two-year fellowship that will allow her to develop a domestic research project—similar to her New Zealand study—among an American Indian population.

Thayer couldn't be more pleased that she brought her passion and expertise to CU Denver, where she is able to grow as both a teacher and researcher among colleagues who are standouts in their field.

Jared Brown, Ph.D., sees a big future in the study of something tiny—nanotechnology—at the CU Anschutz Medical Campus.

It's one of the main reasons Brown chose to return to his home state of Colorado to pursue nanotechnology research at the University of Colorado Skaggs School of Pharmacy and Pharmaceutical Sciences. The team synergies within the School of Pharmacy as well as the Anschutz Medical Campus's substantial resources and outstanding collaborative opportunities were all a significant draw. Also, Brown and his wife, Scottie, who works in the development office at the CU Cancer Center, wanted their two young children to be closer to grandparents who live in the area.

"We have family here, which is nice," he said. "But, definitely, a main impetus for coming here were the resources—not only in our school, but what the whole campus has for research." Brown spent the past decade on the East Coast, first in post-doctoral studies at the National Institute of Allergy and Infectious Diseases (Laboratory of Allergic Diseases), in Bethesda, Md., then as a faculty member at the East Carolina University School of Medicine (Department of Pharmacology).

Brown earned a bachelor of science degree from Colorado State University and a doctorate at the University of Montana, Center for Environmental Health Sciences, Skaggs School of Pharmacy.

"Here at the CU Skaggs School of Pharmacy and Pharmaceutical Sciences," he said, "we have a growing nanotechnology group that will hopefully build over the next five years or so."

The team studies various aspects of the growing field—therapeutic drug delivery, biological nanotechnology related to cancer research, toxicology. In his lab, Brown, an assistant professor of toxicology, is especially interested in understanding how engineered nanomaterials interact with the human body's immune system to ensure the safe development of nanotech-related consumer products and nanomedicines.

"Our interest mainly is on the nanomedicine side and what happens to the materials after they're injected into a person," he said. "We're looking at allergic and immune responses, such as exacerbation of asthma, mast cell activation and anaphylaxis. All of those conditions could occur due to exposure to some of these nanomedicines. We're trying to understand why that is happening."

A passion for mentoring

Brown also heads up the graduate program in toxicology. In addition to working on accreditation matters, he oversees the admission of students, coordinates mentors and helps students set up their labs, course work and dissertation process. "Basically, seeing them through the whole process," he said.

Mentoring students is another of his passions. Last year, an eighth-grader from a Denver charter school visited the School of Pharmacy looking for help on a nanotechnology project. Brown jumped in and set the boy up with equipment and ideas on how to proceed. The student ended up winning the state science fair for his age level and is now entering a national science fair.

"He did most of the work at home, but we provided most of the materials. We showed him how to interpret data and analyze and graph it," Brown said. "That was an unexpected opportunity that came up."

When he's not working to complete various grant proposals this summer, Brown, who joined the faculty on the Anschutz Medical Campus just a year ago, squeezes in time for his favorite pastimes. His family enjoys Colorado's bountiful outdoor playground: fly fishing, cycling, skiing, snowboarding.

Brown is also busy meeting with colleagues across the Anschutz Medical Campus, including in oncology and pulmonology, to expand his nanotechnology research. "I think there will be more opportunities for collaboration like that as the field grows," he said.

Tagged with:
Department of Anthropology, research, Skaggs School of Pharmacy and Pharmaceutical Sciences

Send your thoughts and suggestions for the Newsletter.
END_OF_DOCUMENT_TOKEN_TO_BE_REPLACED