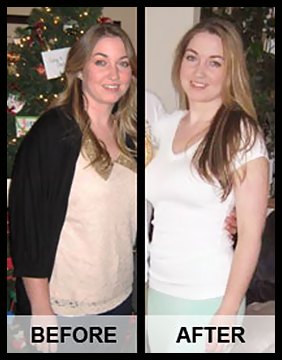 Good advice, one-on-one guidance and personal motivation got 24-year-old Kristina Colson where she needed to be—25 pounds lighter and with reduced symptoms of her polycystic ovarian syndrome (PCOS), a major cause of infertility in women.

Although the program hadn't officially launched when she learned that being overweight increases infertility, Colson could be counted as the first success of WIFI (Wellness Interdisciplinary Fertility Initiative), a weight loss and fertility co-management system between University of Colorado Advanced Reproductive Medicine and the Anschutz Health and Wellness Center.

She first went to see Alex Polotsky, M.D., at Advanced Reproductive Medicine in December 2012 to confirm her OB/GYN's diagnosis of PCOS and to see if she might need fertility treatment. Dr. Polotsky agreed with the PCOS diagnosis, but not with the steroid treatment that had been suggested for Colson that had her worried.

"Dr. Polotsky offered me a nutrition-based approach and a recommendation to lose weight. I liked the possibility of not having to take medications for PCOS that can affect me in adverse ways," Colson says. "And if I were to have a baby, I want to try to do it naturally and not take steroids and such medications. When Dr. Polotsky suggested the natural way rather than medications, I was all for it."

The next step was to lose her excess weight, much of which she had put on due to stress after she was diagnosed with PCOS. Polotsky referred her to the CU Anschutz Health and Wellness Center and Holly Wyatt, M.D.

"It went really well right from the start. Dr. Wyatt was very knowledgeable about PCOS and how weight can affect your hormones," Colson says. "Dr. Wyatt was one-on-one and that worked for me. I really needed that."

This personal approach to weight loss coupled with the special needs and considerations of infertility patients is the hallmark of the new WIFI program. Colson was something of a test case. And it worked.

She says Wyatt was right up front with motivational help, explaining the reasons for every step in the diet, exercise and mindfulness plan she had worked out for her. For example, it was difficult for Colson to accept that she should go to the gym every day. But Wyatt explained that it was necessary to keep up her metabolism in order to make the diet more effective and for it to have a long-term effect.

Colson learned that little things make a big difference. Wyatt told her to lay out her gym clothes the night before, a subtle suggestive action that Colson says worked to motivate her. "It reinforces the habit, even if you happened not to go that next day."

Motivation is key to follow through, and Colson says the program excelled in that regard. That outside motivation, added to her own drive to have a family in the future, helped Colson stay on track.

After initially losing water weight, Colson was having problems with the diet. "I called Dr. Wyatt on her cell phone and she adjusted the program's diet just for me. I also had a hard time doing the cardio workout she said I needed to do after I did my weightlifting. Dr. Wyatt suggested doing the cardio first thing, and that worked for me," Colson says.

By week nine of the 16-week program, Colson had hit her target weight, shedding 25 pounds. She kept it off throughout the rest of the program—and to this day five months later she's kept it off.

"I liked how Dr. Polotsky and Dr. Wyatt saw this as a lifelong solution, if I kept up my side of the bargain. Dr. Wyatt told me at the beginning that I would feel better. And I do," says Colson. "Now if I don't go to the gym, I feel yucky."

She continues to follow the doctors' advice. She's eating six times a day, getting her carbohydrates not from bread but from fruits and vegetables, which is a big difference from what she used to do. And she's watching her sugar intake.

"I'm not in the program now, I'm on my own. But I can call Dr. Wyatt whenever I need to," says Colson.

Her excess weight is off and her fertility prospects are up.

"My hope is that we might not need assisted reproductive technology to get pregnant. I'm not sure about that, but it seems more possible now," Colson says. "A lot of my symptoms from PCOS have improved since I lost the weight, and that's very encouraging."