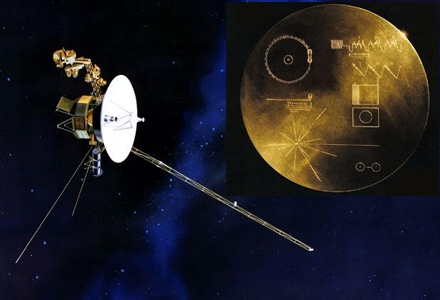 Identical spacecraft, Voyager 1 and Voyager 2, were launched in the summer and programmed to pass Jupiter and Saturn on different paths. Voyager 2 went on to visit Uranus and Neptune, completing the “Grand Tour of the Solar System,” perhaps the most exciting interplanetary mission ever flown. University of Colorado Boulder scientists, who designed and built identical instruments for Voyager 1 and Voyager 2, were as stunned as anyone by the data the spacecraft sent back to Earth.

Amazingly, both spacecraft have kept on chugging (if one can call 35,000 miles per hour chugging). NASA announced last week that Voyager 1 – about 11 billion miles from Earth – has now sailed to the edge of the solar system and is expected to punch its way into interstellar space in a time span ranging from a few months to a few years. Voyager 2 is not far behind, but on a different trajectory.

Charlie Hord, a former planetary scientist at CU-Boulder’s Laboratory for Atmospheric and Space Physics, remembers the salad days of the Voyager program, which was managed by NASA’s Jet Propulsion Laboratory in Pasadena, Calif. Hord, the principal investigator for a time on the LASP instrument known as a photopolarimeter built for Voyager, still shakes his head in wonder as he recalls some of the discoveries.

“All of the scientists were dazzled by the pictures of the moons of Jupiter and Saturn coming back,” recalled Hord, 74, who still lives in Boulder. “To finally look at them up close was the most remarkable thing I’ve ever seen in my life.” Since the early Voyager days were pre-Internet, “We used to send people over to the JPL newsroom to steal press kits so we could look at the pictures taken by the imaging team,” he laughs.

The LASP photopolarimeter, a small telescope that measured the intensity and polarization of light at different wavelengths, was used for a variety of observations during the mission. The instrument helped scientists distinguish between rock, dust, frost, ice and meteor material. And it helped scientists determine the structure of Jupiter’s Great Red Spot, which Hord called “a giant hurricane that has blown for 200 years,” as well as the properties of the clouds and atmospheres of Jupiter, Saturn, Uranus and Neptune, and Saturn’s largest moon, Titan.

The CU-Boulder instrument also was used to learn more about the makeup of the Io torus, a doughnut-shaped ring around Jupiter formed by volcanic eruptions from its moon, Io, as well as determining the distribution of ring material orbiting Saturn, Uranus and Neptune and the surface compositions of the outer planet moons.

One of the finest mission moments for Hord was analyzing the data returned from the photopolarimeter when it was locked on the star Delta Scorpii as it emerged from behind Saturn and passed behind the elegant rings in a “stellar occultation” when the light from a star is blocked by an intervening object. The processed photopolarimeter data showed each ring was made up of numerous smaller ringlets. “They were beautiful – they looked just like the grooves on a phonograph record,” he said.

On the off chance either spacecraft is encountered by an alien civilization, each are carrying what are known as “Golden Records” – gold-plated copper, audiovisual phonograph records with greetings in 54 languages, photos of people and places on Earth, the sounds of surf, wind, thunder, birds and whales, diagrams of DNA and snippets of music ranging from Bach and Beethoven to guitarist Chuck Berry’s classic rock ’n’ roll song “Johnny B. Goode.” The spacecraft even carries a stylus set up in the correct position so that aliens could immediately play the record, named “Murmurs From Earth,” by Carl Sagan, who conceived the Golden Record effort.

“I thought adding the Golden Record to the mission was a neat thing to do,” said Hord, a guitar player who performs jazz and big-band music with a trio that visits Boulder retirement homes. He recalled that JPL threw the Voyager team a party to celebrate the end of Voyager 2’s Grand Tour as it passed by Neptune in 1989 (Pluto was in a distant part of its orbit at the time). “We even had Chuck Berry playing his guitar on the steps of the Jet Propulsion Laboratory. It was really something.”

In 1990, Voyager 1 turned around one last time and took a portrait of the solar system – a sequence of photos that revealed six of the nine planets in an orbital dance. From nearly 4 billion miles away, Earth took up only a single pixel.

“To me, Voyager was the most fun and interesting planetary mission ever,” said Hord, who enlisted the help of then-graduate students Carol Stoker (now a NASA planetary scientist) and Wayne Pryor (now a professor at Central Arizona University) to analyze data from the mission. Over its lifetime, the CU-Boulder photopolarimeter science team also included LASP Professor Larry Esposito, Senior Research Associate Ian Stewart, retired faculty members Karen Simmons, Charles Barth and Robert West, as well many undergraduate and graduate students.

Esposito, who is still at LASP and is the principal investigator on a $12 million CU-Boulder instrument package aboard NASA’s Cassini Mission to Saturn, said his biggest thrill of the Voyager mission was the Neptune fly-by in 1989 when the gas giant “went from being a small blurry dot to a planet with bright clouds and numerous moons and rings. Triton erupted before our eyes, and Neptune’s partial rings were punctuated and variable like a type of sausage that the French make.”

Then-CU President Gordon Gee was so impressed with the blue image the LASP team made of Neptune’s ring system that he used it on his Christmas cards, said Esposito, a professor in the astrophysical and planetary sciences department.

Esposito believes the biggest discovery by CU-Boulder’s Voyager photopolarimeter team was the intricate structure of Saturn’s F ring – a ring he discovered in 1979 using data from NASA’s Pioneer 11 mission. The CU-Boulder team determined the faint F ring was made up of three separate ringlets that appeared to be braided together, and that the inner and outer limits of the ring were controlled by two small “shepherd satellites.”

In addition, Esposito said that density waves – ripple-like features in the rings caused by the influence of Saturn’s moons – allowed the team to estimate the weight and age of Saturn’s rings.

As for Hord, the Casper, Wyo., native went on to be the principal investigator for two spectrometers designed for NASA’s Galileo Mission to Jupiter that launched in 1989 to tour the Jovian system, including its bizarre moons. Hord officially retired in 1997, but returns to campus for occasional visits with his colleagues.

In 40,000 years, Voyager 1 will float within 9.3 trillion miles of the star AC+793888 in the constellation Camelopardalis. In 296,000 years, Voyager 2 will pass within 25 trillion miles of Sirius, the brightest star in the sky. Perhaps on the way, the spacecraft will encounter some musically inclined aliens up for a little Bach, Beethoven or Berry.

Tagged with:
Laboratory for Atmospheric and Space Physics, NASA