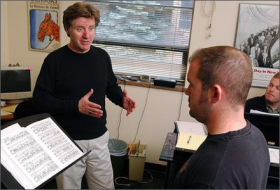 Patrick Mason (Photo by Casey A. Cass/University of Colorado)

Patrick Mason, a professor of voice at the University of Colorado Boulder’s College of Music, has been selected to receive the 2012 Hazel Barnes Prize. The prize is the highest faculty recognition for teaching and research awarded by the university.

Mason will receive an engraved university medal and $20,000, the largest single faculty award funded by CU-Boulder. He will be recognized at spring commencement on May 11 and at a reception in his honor in the fall.

The prize recognizes Mason’s prolific body of work in national and international concerts and in the recording studio, along with his exceptional research and teaching record as a CU-Boulder faculty member since 1993.

“Professor Mason’s vast musical knowledge and experience has been highly influential for his students, many of whom have gone on to be successful in the fiercely competitive world of voice and opera,” said CU-Boulder Chancellor Philip P. DiStefano. “Exemplary faculty members like professor Mason make learning and teaching one of our greatest pillars of impact at CU-Boulder, and it is with honor that we recognize his service not only to academia, but also to the world of music.”

In the 20-year history of the Hazel Barnes Prize, Mason is the first College of Music professor to win. His expertise spans the entire range of notated Western music, from the medieval era to the present, according to nomination materials submitted on Mason’s behalf.

The baritone has appeared on stages across the nation and in Tokyo, Rome, Bonn, Paris, Luxembourg, Amsterdam and Cairo. He has sung with the New York Festival of Song since 1990, with CU-Boulder’s Takács Quartet and at chamber music festivals in San Francisco; Steamboat Springs, Colo.; Moab, Utah; and Skaneateles, N.Y.

He was a 2006 Grammy Award finalist in the category of Solo Vocal Performance for his Bridge Records recording of Songs of Amy Beach.

Mason is a Berton Coffin Faculty Fellow at CU-Boulder and is the vocal coordinator of the John Duffy Composer’s Institute, an annual two-week event in Norfolk, Va., in which young singers and composers work to create new pieces for the musical stage.

The Hazel Barnes Prize was established in 1991 to recognize the enriching relationship between teaching and research. The prize was named in honor of CU-Boulder philosophy professor emerita Hazel Barnes, who taught at CU-Boulder from 1943 to 1986 and is noted for her interpretations of the works of French philosopher Jean Paul Sartre. Barnes died in 2008 at age 92.

For more information on the Hazel Barnes Prize and a list of recipients visit http://chancellor.colorado.edu/hazel-barnes-prize.

Tagged with:
award, College of Music