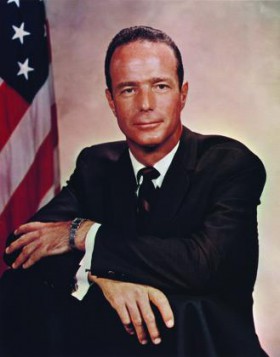 Scott Carpenter, a University of Colorado Boulder alumnus and a famed NASA Mercury astronaut who became only the second American to orbit Earth, died Thursday.  He was 88.

Carpenter, a Boulder native, entered CU-Boulder’s astronautical engineering program in 1945, eventually earning a bachelor of science degree. He orbited Earth three times on May 24, 1962, in NASA’s Aurora 7 capsule before splashing down in the Atlantic Ocean.

Carpenter was the first of 18 CU-Boulder astronaut affiliates to have flown in space. As one of the first NASA astronauts, Carpenter and his colleagues were celebrated in the Tom Wolfe book “The Right Stuff,” which told the story of early military test pilots and the original Mercury 7 astronauts.

Born in Boulder on May 1, 1925, Carpenter graduated from Boulder High School in 1943. He then entered the Navy’s V12a flight training program at Colorado College in Colorado Springs.  He spent the next year training in California and Iowa, returning to Boulder in 1945 to study at CU-Boulder.

“In his two-decades long career as a Naval aviator, astronaut and aquanaut, Scott Carpenter brought honor and distinction to CU-Boulder while embodying the adventurous spirit of our nation,” said CU-Boulder Chancellor Philip P. DiStefano. “Our space program, and all space and ocean researchers everywhere, owe him a debt of gratitude. He will be sorely missed.”

In 1965 Carpenter took a leave of absence from NASA to participate in the Navy’s Man-in-the Sea Project as an aquanaut in the SEALAB II project off the coast of La Jolla, Calif. where he spent 30 days living and working on the ocean floor at a depth of more than 200 feet.  Because of his groundbreaking deep-sea diving experiences with the Navy, Carpenter is hailed by many to be the first person to conquer both outer and inner space.

“My colleagues and I are deeply saddened by the passing of Astronaut Scott Carpenter,” said CU-Boulder aerospace engineering sciences Chair Penina Axelrad.  “He has long been a member of the CU family and a tremendous inspiration for our aerospace faculty and students.”

In a 2012 interview with CU’s alumni magazine, The Coloradan, Carpenter spoke about his historic space journey. “I still remember what a thrill it was being up there -- I liked the feeling of weightlessness, and the view I had of Earth.”

Carpenter and the other Mercury 7 astronauts created the Astronaut Scholarship Foundation in 1984. The foundation now involves more than 80 astronauts, awards 28 $10,000 scholarships annually and has dispersed more than $3 million to promising students in science and engineering since 1986.

As one of the original Mercury 7 astronauts, Carpenter followed Alan Shepard, Gus Grissom and Glenn into space and was followed by Wally Schirra, Gordon Cooper and Deke Slayton.

Carpenter was commissioned in the U.S. Navy in 1949 and flew a variety of missions during the Korean War.  He attended Navy Test Pilot School in Maryland in 1954 and was assigned as an Air Intelligence Officer on the USS Hornet aircraft carrier. In April 1959, he was selected by NASA to be an astronaut.

Although he was one course requirement short of graduating with a bachelor’s degree in aeronautical engineering when he left CU in 1949, the university awarded him his degree in 1962 following the successful Aurora 7 flight. When presenting the degree to Carpenter, then-CU President Quigg Newton noted that “his subsequent training as an astronaut has more than made up for his deficiency in the subject of heat transfer.”

In 1967, he became the Navy’s director of aquanaut operations during the SEALAB III experiment.  After retiring from the Navy in 1969, he founded and became CEO of Sea Sciences Inc., a venture capital corporation that developed programs aimed at enhanced use of ocean resources and improved health of the planet. He worked closely with noted diver and scientist Jacques Cousteau and members of his Calypso team, and subsequently dove in most of the world’s oceans, including under Arctic ice.

Carpenter later became a consultant to industry and the private sector and lectured around the world, narrated TV documentaries and wrote several books, including the 2002 New York Times best-seller “For Spacious Skies: The Uncommon Journey of a Mercury Astronaut,” co-authored with his daughter, Kris Stoever.

Send your thoughts and suggestions for the Newsletter.
END_OF_DOCUMENT_TOKEN_TO_BE_REPLACED