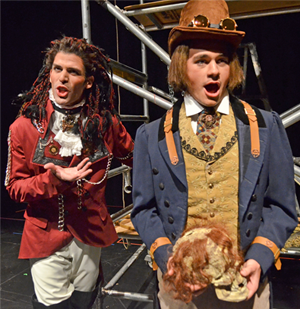 Michael Aiello, left, as Nick Shadow and Christian Sanders as Tom Rakewell in “Rake’s Progress.” (Photo by Casey A. Cass/University of Colorado)

The University of Colorado Boulder’s interdisciplinary Rake's Progress collaboration is under way, with the staging of Stravinsky’s “The Rake’s Progress” opera set for this weekend.

The world premiere shared staging of all three versions of William Hogarth’s “Rake’s Progress” also features an exhibition at the CU Art Museum and a conference hosted by the Center for British and Irish Studies. The event provides a multidisciplinary interpretation of this seminal work in Hogarth’s career.

Collaboration among CU-Boulder’s Center for British and Irish Studies, CU Art Museum, College of Music, CU Opera, and the English and art and art history departments of the College of Arts and Sciences provides this unique opportunity in the world of art and music. While elements of the “Rake” trio have been presented in the past, the event marks the first time all three versions have been presented together. A conference will complete the opportunity for discussion of the works and their influence.

At 7:30 p.m. Friday and 2 p.m. Sunday in Macky Auditorium, CU Opera presents “The Rake's Progress” by Stravinsky.  The opera is based on a series of famous engravings by Hogarth and follows the character of Tom Rakewell during his descent from rural pleasures into the whirl of London society life, which leads him toward madness and despair. CU Opera's extraordinary production is presented in a steampunk style and sung in English.

A free pre-performance talk will be given one hour before the performances in the Loge.  On Friday, the guest speaker will be Paul Miller who is a performer in the show and an Instructor of Music Theory at the College of Music. On Sunday, Professor Matthew Carlson, a professor form High Point University and expert on Auden will speak.  He is also the author of “Opera Addict: W. H. Auden's Operatic Theory and Its Influence on The Rake's Progress.”

Single tickets start at $14. Discounts are available for members of the CU-Boulder community, seniors, youth and groups. This performance is part of the CU Opera or choice option subscriptions. Call the CU Presents Box Office at 303-492-8008 or visit www.cupresents.org for more information or to purchase tickets for this event.

The CU Opera program has been designated a “Program of Excellence” by the Colorado Commission on Higher Education. Students from the CU Opera program took home First Place in the National Opera Association’s Opera Scenes contest in both 2010 and 2011.  Undergraduate and graduate students at the College present several major productions each year.

A Brown Bag Preview of the production is set for noon Friday at ETown in downtown Boulder. The preview provides opportunities to join the cast for a glimpse of selections from “The Rake's Progress.” It’s free and open to the public.

A full listing of events can be found on the CU-Boulder Events Calendar and on the website.