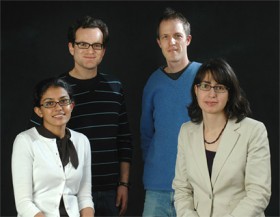 Four University of Colorado at Boulder professors will receive $750,000 grants under the Department of Energy's new Early Career Research Program — the most awards received by any university in the nation.

The four assistant professors were among 69 scientists selected from 1,750 applicants at U.S. universities and DOE national laboratories. They will receive five-year research grants of at least $150,000 per year under the American Recovery and Reinvestment Act. The awards were announced last week by Energy Secretary Stephen Chu and Colorado Gov. Bill Ritter.

CU-Boulder's four awards were the most received by any U.S. university. Nearest to CU's total were the Massachusetts Institute of Technology and Princeton University, which each received three.

"That CU-Boulder would distinguish itself nationally with more early career awards than any other university in the nation is a great tribute to the quality faculty and outstanding programs that bring the best minds to CU-Boulder," said Provost Stein Sture. "We are transforming the definition of research and scholarship, and this award is evidence that our efforts are paying off for a generation of young faculty."

"This is truly an outstanding accomplishment," said Professor Paul Beale, chair of the physics department. "Early career awards are designed to assist the best young scientists in the nation to make innovative and groundbreaking discoveries. Winning three awards in the department of physics is a sign of the success we have had in recruiting the best young scientists in the world to join our faculty. Nine of our junior faculty members have won early career awards from federal funding agencies since 2000."

The DOE's Office of Science plans to continue the program, choosing new candidates on an annual basis, and supporting them under annual appropriations.

"This new program reflects the administration's strong commitment to creating jobs and new industries through scientific innovation," said Secretary of Energy Steven Chu in his announcement Tuesday, Jan. 19. "Strong support of scientists in the early career years is crucial to renewing America's scientific work force and ensuring U.S. leadership in discovery and innovation for many years to come."

Award winners had to be untenured, tenure-track assistant professors at U.S. academic institutions or employed full time at a DOE national laboratory and who received a Ph.D. within the past 10 years. Research topics were required to fall within the purview of the department's Office of Science's six major program offices: Advanced Scientific Computing Research, Basic Energy Sciences, Biological and Environmental Research, Fusion Energy Sciences, High Energy Physics and Nuclear Physics.

Awardees were selected from a pool of 1,750 university- and national laboratory-based applicants. Selection was based on peer review by outside scientific experts.