This year's CLC class at UCCS

Grant Matthews (UCCS '10) had been an integral member of the Chancellor's Leadership Class (CLC) throughout his time at the University of Colorado at Colorado Springs. As part of this four-year program for high-potential students, he has undertaken more than 400 hours of community service, benefited from distinctive CLC-specific courses and talks, and received guidance from regional leaders.

And as the recipient of a CLC scholarship, Matthews knows the value of those who provide not only mentorship, but also financial support.

"The graduating class has often given the program director a parting gift," Matthews said. "But we decided to give back something meaningful. We decided we wanted to fund a CLC scholarship for next year."

The goal was $4,000, a steep one for students who often come from financially challenged families and must stretch merely to afford college. Despite their best efforts — fundraising through personal connections and events such as garage sales — their initial effort fell a bit short. At the annual Boots and Stars celebration dinner for CLC participants, friends, and supporters, Matthews announced that he and his peers had collected nearly $2,700: a worthy effort, but not enough for the full scholarship.

"I got the feeling they didn't know where to go next," said Barbara Steiner, who attended the event with her husband, Alan, a former Hewlett-Packard executive and current CU Foundation trustee. They had joined the CLC board and sponsored an annual scholarship because they saw a need to develop young leaders for the Pikes Peak region. Upon hearing Matthews report on how their scholarship effort had gone at the Boots and Stars event, Barbara said, "We looked at each other and said, 'Maybe this is something we could do.' We didn't want them to fall short."

She raised her hand and told Matthews they would make up the gap on the spot, giving them the full $4,000 scholarship amount they needed. It was a moment that affected the CLC senior class profoundly. 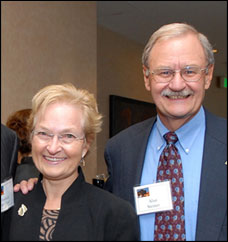 "I was the happiest person in the world," Matthews said.

Matthews's CLC experience has clarified his intended career path working for nonprofits. He hopes subsequent CLC senior classes will establish an annual tradition of raising money for a scholarship. As he has discovered, the work is significant, but so is the reward.

"We accomplished our goal at the last minute," he said. "You can't put a price tag on that."