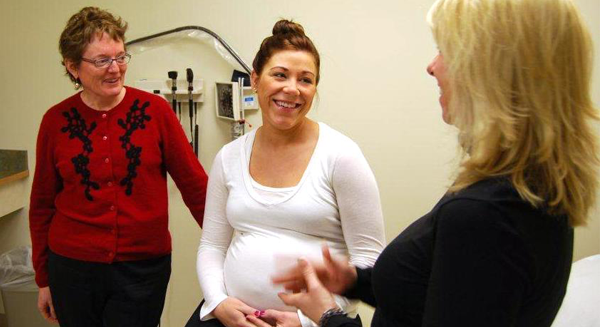 Cheryl Chessick, left, and Erica Schwartz chat with expectant mother Elizabeth McCune (not a PROMISE clinic patient) at the University of Colorado Hospital. The psychiatrist and midwife collaborate with physicians in monitoring pregnant women for signs of depression and other mood disorders. (Photo by Jackie Brinkman/University of Colorado)

The birth of a child is accompanied by a range of feelings, from joy to wonder and worry -- even fear. But often, women find that a baby brings something else: depression.

A few days or a few weeks of mood swings and irritability are natural during pregnancy and shortly after a baby’s birth. As many as 15 percent of women, however, experience more severe symptoms that don’t go away, including insomnia, loss of interest in life, withdrawal, or even thoughts of harming themselves or their newborn. 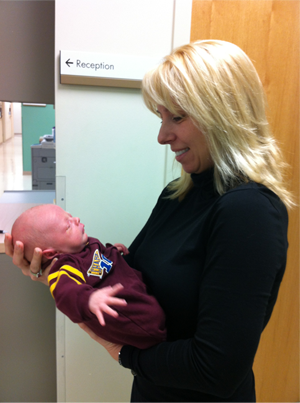 “Being pregnant creates an environment where there’s a lot of interpersonal change … and women don’t have control of what’s happening,” said Cheryl Chessick, a perinatal psychiatrist who helped found PROMISE (Perinatal Resource Offering Mood Integration Services and Evaluation) and is a co-director of the program at the University of Colorado Hospital. Through PROMISE, care providers identify women who are suffering from symptoms of depression and then work to help them manage the issues.

“People want to have the nurturing instinct and society talks about it as the norm. When they don’t necessarily feel that right away, women have self-deprecating thoughts: ‘What’s wrong with me?’ ‘What am I doing wrong?’ It starts a cascade of worry and depression,” said Erica Schwartz, director of Midwifery Services at CU Denver and co-director of PROMISE.

Chessick and Schwartz work with other university care providers to screen women for depression using a simple, two-question diagnostic tool at several points during their pregnancies. Women with a need are then directed to PROMISE for treatment. Oftentimes, an individualized set of mental and physical tools may help women manage the life changes that accompany pregnancy and birth. Some women, who have more severe symptoms or a genetic predisposition to depression, might need more proactive or longer treatment plans, or referrals to other mental health professionals.

PROMISE is one of only 10 clinics in the country that offers such integrated care. Now in its third year of operation, PROMISE has helped more than 400 clients, said Chessick, who also is director of Women’s Studies and Treatment at the CU Denver Depression Center.

“There has been a lot of focus on perinatal mood disorders and there’s clearly a need,” Schwartz said. “It’s well-demonstrated that women with a history of mood disorders have a very high re-occurrence rate of about 65 percent when they get pregnant.”

Historically, women were not screened until after a baby was born, and then the women were referred to outside professionals. The stigma associated with perinatal mood disorders or talking with unfamiliar providers often kept women from seeking treatment.

“Having this specialty practice within the safety and security of their obstetrics providers reduces a lot of that stigma,” Schwartz said. “A lot of times women just want to will the diagnosis away. We try to explain that mood disorders are like having high blood pressure or diabetes. You can’t make them go away, but there are definitely things you can do to alleviate the intensity. For diabetes, you can eat better; for mood disorders, you can add more structure and therapy.”

One therapy used by the providers at PROMISE is “mindfulness,” a technique that trains people in stressful situations to focus on one entity in the environment.

For instance, said Schwartz, a few weeks after giving birth, one patient found that she did not feel connected to or want to hold her newborn. “I had her use this technique. When she held the baby, she had to focus on that moment: how the baby felt, how the baby smelled, how the baby sounded.”

Schwartz said the idea behind the technique is to stop women from fretting about other demands such as the children in the other room, what’s for dinner, or financial concerns. “You intentionally bring your focus back to the moment so you don’t spin off into everything else. You enjoy that moment and feel the benefits of that experience.”

Other treatments include relaxation exercises, diaphragmatic breathing, and teaching ways to make the birth of a child a little less chaotic. “Women are feeling a lot of stress and aren’t sleeping properly because they’re ruminating, they’re worrying. We’ll teach them how to worry effectively by putting some structure into it” by writing down the issues, what can be done to solve them and where help can be found, said Chessick.

“We’re trying to pay attention to what people know about mental health and their own mental health. Some know a lot, some know a little and a lot of people know nothing,” Chessick said. The focused treatments target patients but also involve partners and family members. “Everyone gets the same tools. Spouses sometimes say, ‘I don’t know what to do.’ But I’ll give them something to do. People want active tools and a sounding board to be able to bounce off ideas” about what’s happening in their lives.

Send your thoughts and suggestions for the Newsletter.
END_OF_DOCUMENT_TOKEN_TO_BE_REPLACED