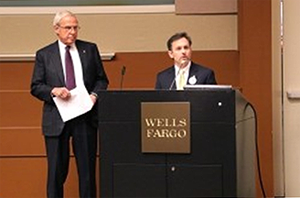 A bevy of UCCS faculty and staff joined top CU and Colorado Springs community leaders Dec. 4 to show support for the City for Champions proposal to a state Economic Development Commission.

The UCCS and CU contingents joined leaders of Colorado Springs and El Paso County municipal government as well as leaders of the U.S. Air Force Academy, the U.S. Olympic Committee and El Pomar Foundation at a daylong hearing in downtown Denver of the Economic Development Commission. The groups advocated for $120.5 million in economic development funds to fund the projects. The group presented a video showing community support and youth members of the Colorado Springs Conservatory also sang in support. The proposal seeks money through the Regional Tourism Act which gives large projects a percentage of the sales tax generated during the next 30 years.

Shockley-Zalabak presented the business case for the overall project and details of the UCCS proposal.

“Colorado Springs was founded in part on mining and medical tourism – tuberculosis,” Shockley-Zalabak told the nine-member commission. “City for Champions is the modern day branding of our community with its many natural assets as a destination for the country bringing hundreds of thousands of visitors to our community.”

A large portion of the presentations, questions from the commissioners, and statements by those who oppose the project, focused on estimated numbers of visitors the projects will bring to Colorado Springs and how much money those people will spend while visiting.

Shockley-Zalabak focused her comments on the UCCS Sports Medicine and Performance Center which would be located on North Nevada Avenue, adjacent to the new Lane Center for Academic Health Sciences. She cited the growth of UCCS, faculty strength in research and training, previous faculty ties to USOC and collaboration with the CU School of Medicine as a way to bring new medical expertise and patients to Colorado Springs.

“Without this opportunity, the Sports Medicine and Performance Center will remain in our master plan,” Shockley-Zalabak said. “But it is not reasonably anticipated to be developed within the foreseeable future. City for Champions opportunities will be delayed and squandered. The opportunity is now.”

The Sports and Medicine Center would work with Olympic athletes, wounded service members, professional athletes and many others in a clinic-style arrangement. When estimating patient visits to the center, UCCS officials looked at similar centers in San Antonio, Texas; Philadelphia; Pittsburgh; and Bryn Mawr, Penn.

“The combination of medical services with our faculty who currently work with Olympic, professional, wounded warrior and Para-Olympians is unique in Colorado and the nation,” Shockley-Zalabak said.

The City of Colorado Springs, the applicant for the RTA funding, believes it should receive $120.5 million or 14.2 percent of the estimated sales tax generated by the projects during the next 30 years. The rest would go to the State of Colorado. If the commission doesn’t approve funding for the project, the state will receive no monies, proponents argued, and the projects likely won’t be built.

Many questions Wednesday focused on how the balance of the $250 million project would be raised if the state provided the requested $120.5. For the UCCS project, some revenues would be derived from clinic revenue and from either CU or the State of Colorado’s capital construction budget. Other projects would be funded through donations, the sale of bonds, or from revenues generated by activity such as parking fees.

The commission is expected to announce later this month if it will fund the City for Champions project and at what level.

See a video of the project: http://youtu.be/DydC-LH9w48