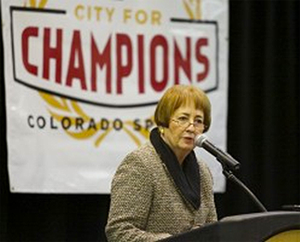 In a media briefing at the Upper Lodge, UCCS, CU and community leaders cheered the commission’s decision to allocate $120.5 million while charting the future for the City for Champions project. City for Champions is an ambitious effort to build a downtown stadium, Olympic museum, a sports and wellness center at UCCS and a visitor’s center at the Air Force Academy. The commission’s unanimous vote signaled the region’s recovery from fires, flooding and recession.

“Today is transformational for the community and the community’s university,” said Chancellor Pam Shockley-Zalabak. “We have shown our determination to recover from some really tough times. We are a city that doesn’t quit and is moving forward.” 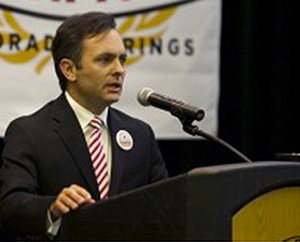 “Today is an exceptional day,” Hybl said. “We are taking the strengths the city already has and leveraging them into more, not unlike Spencer Penrose did when he built the Broadmoor Hotel or a road up Pikes Peak. He knew the value of the tourist to our community.”

Bach and Hisey emphasized the need to begin mending fences with those who disagreed with the proposal, including the Colorado Springs City Council. The charismatic Murphy simply called the day a “win, win, win” and concluded, “God knows we deserve this.”

For UCCS, approval of the funding means a $13 million jumpstart on plans to build a second building on North Nevada Avenue devoted to sports and wellness medicine. The UCCS Sports Medicine and Performance Center will be adjacent to the new Lane Center for Academic Health Sciences. There, UCCS faculty strengths in research and training, existing faculty ties to USOC and collaboration with the CU School of Medicine will bring new medical expertise and patients to Colorado Springs.

The Sports and Medicine Center would work with Olympic athletes, wounded service members, professional athletes and many others in a clinic-style arrangement.

Now that state incentives are approved, the next step would be for the Colorado Springs City Council and the El Paso County Board of Commissioners to approve financing for the balance of the project. At UCCS, an additional $17 million is needed to construct the UCCS Sports Medicine and Performance Center. Determining the sources of the additional funds will be the subject of considerable discussions and work over the next several months, according to Brian Burnett, senior executive vice chancellor, Administration and Finance. 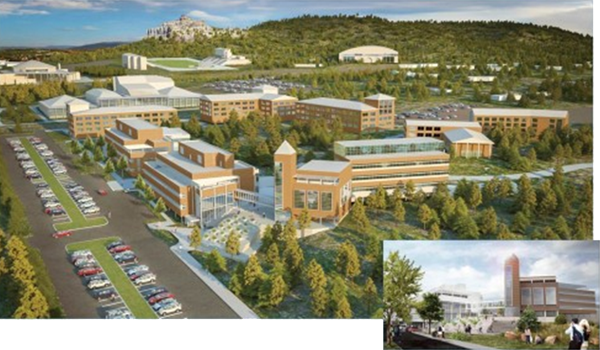