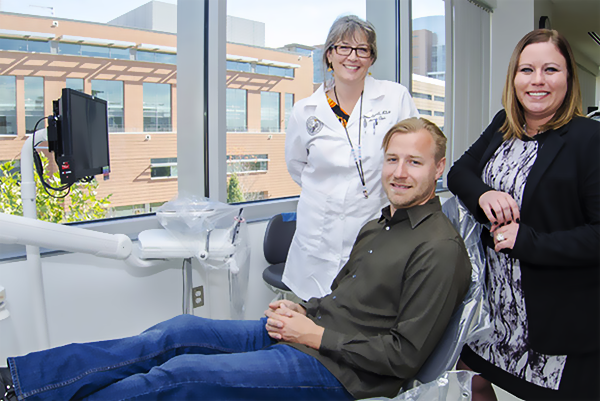 If something sounds too good to be true, it often isn’t true, but the CU Heroes Clinic at the CU School of Dental Medicine on the Anschutz Medical Campus is the exception.

Free dental care for veterans who are enrolled in a degree program at CU Denver or CU Anschutz may sound like a deal you should doubt, but dozens of veterans have the smiles to prove it’s the real deal.

“Dental care is one of the services the VA (Veterans Administration) absolutely doesn’t cover,” said Tim Wienecke, an Air Force veteran and graduate student in the School of Education & Human Development (SEHD). “I was one of the first students to use the Heroes Clinic, and now I can refer other student veterans there.”

The CU Heroes Clinic operates in collaboration with the CU Denver Office of Veteran Student Services (OVSS). It was made possible by a $1 million gift from Delta Dental of Colorado.

“Ours is the one of the first universities in the nation to create a clinic specifically for student veterans,” said Denise Kassebaum, DDS, MS, dean of the CU School of Dental Medicine. “It would not be possible without the incredible generosity of Delta Dental of Colorado.”

In the first nine weeks after it opened on Aug. 25, the Heroes Clinic provided 76 student veterans with personalized care, from cleanings to crowns, from periodontal to preventive sealants, from X-rays to bleach trays.

“These student veterans have given so much to our country that they truly are heroes who are deserving of a Heroes Clinic established specifically for them,” said Kate Paul, president and CEO of Delta Dental of Colorado. “We are honored to work with CU Denver | Anschutz to provide this much-needed service.”

No. 2 Even the dentists are veterans 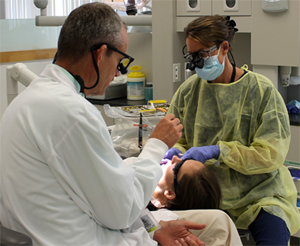 Student veterans at the Heroes Clinic are cared for by fourth-year dental students who are supervised by experienced faculty members, including Associate Professor Douglas Wilson, DMD, MS.

“We had one patient who had dark black stains around her front teeth, and she thought the stains were affecting her job prospects during interviews,” Wilson said. “We took care of the stains and she was thrilled.”

Wilson is also a veteran who served as both a general dentist and the dental inspector general for the U.S. Air Force. When he retired after 30 years of service, he thought he would never again experience the camaraderie he felt talking with other military people. But when the chance to supervise student dentists in the Heroes Clinic came along, he jumped at the opportunity.

“I spent more than half my life working in the military, so I have a bond with these students,” Wilson said. “I can speak their language.”

The CU Heroes Clinic may be free, but Heidi Tyrrell, RDH, BA, likes to point out that “freedom isn’t free.”

Tyrrell is the manager of clinical instruction for the clinic. The daughter of a Korean War veteran, she is an unabashed supporter of vets. “When I see a vet, wherever or whenever, I thank them,” she said. “I shake their hand, I buy them coffee. It doesn’t matter what your political views are, you should honor veterans.”

For Tyrrell, running the CU Heroes Clinic is a dream job because it combines all her passions—dental medicine, academia and veterans. The fourth-year dental students who are providing the care are only six months away from graduating, so Tyrrell has set up the clinic like a standard dentist’s office. Because the students are experienced, they can move through cases more quickly than first-year students.

Tyrrell points out that the veterans are also helping the students, by offering a large variety of clinical cases to help students understand what their practice will look like when they graduate.

“The cases that students get in dental school are often very complicated,” Tyrrell said. “But many of the vets just need routine care. There’s something gratifying about taking care of a straightforward case. The population of veterans is more like a real-life dental office setting and that’s good experience for our students.”

All Tyrrell asks in return for the free services provided by the CU Heroes Clinic is a smile on the face of veterans walking out the door. “When I can say, ‘The bad news is you need fillings, but the good news is that it’s free,’ that makes my heart feel good,” Tyrrell said. “It’s an amazing thing to offer to people who have sacrificed for our country.”

No. 4 You will meet fellow veterans

Tim Wienecke spent five years in the U.S. Air Force doing search-and-rescue intelligence work in Colorado and overseas. When he left the Air Force, he returned to Denver to enroll in what he calls “the best counseling program in the state” at SEHD. He is already putting his career aspirations into action working at the OVSS, helping veterans transition from military to civilian life. “It’s a hard adjustment,” he said. “It certainly was one of the harder points of my life.”

Since he finds it easier to counsel people to take steps he has already tried himself, he was one of the early clients at the Heroes Clinic. It had been three years since he had his teeth cleaned, so he described himself as “well past due.”

“It was a fantastic experience,” he said. “It takes a little longer because it’s a student and the professor is observing, but the students are friendly and the faculty is great.”

Missy Garner also made a pilgrimage to the Heroes Clinic during its early months. Seven years in the U.S. Navy took her to far-reaching parts of the world, including Korea, Japan, Guam and Portugal. By the time she enrolled in the CU Denver Business School, she was delighted that she could visit a dentist without pulling out her checkbook. One cleaning later, Garner is also a cheerleader for the Heroes Clinic.

“Not only is the clinic a credit to the university, but it is also a standard for other universities to live up to,” Garner said. “It will definitely help bring more veterans here.”

Garner confesses that she didn’t quite believe that the Heroes Clinic would be free. She anticipated getting one visit with no cost, but imagined that the student dentists would make multiple (and expensive) recommendations for future care that would come out of her pocket.

“People are wary of things that are free,” she said. “But now I’m spreading the word.”

Tyrrell is familiar with the doubters. In the early days of the clinic, when she would visit the OVSS and hand out cards advertising Hero Clinic services, she couldn’t figure out why more students weren’t biting.

“I wondered, ‘Why aren’t you jumping on this?’” she said. “Then I figured out that the students thought it was free to get in the door, but the costs would follow.”

But with the Delta Dental gift targeted to cover veterans’ restorative care and additional funds from the School of Dental Medicine covering preventive and diagnostic care, veterans pay nothing at the Heroes Clinic. And that’s almost too good to be true.