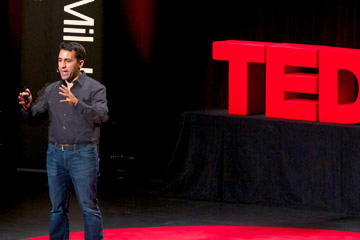 CU Denver’s Dan Connors, director of the computer engineering program, speaks about computer vision to an intent audience at TEDxMileHigh.

An electrical engineer, a photographer, a graphic designer, an award-winning iPad App, a team of mechanical engineering students and an award-winning alternative fuels car. This unlikely mix of University of Colorado Denver representatives put their own unique stamp on the recent TEDxMileHigh “Values & Instincts” event.

Local TEDx presentations like the one in Denver are based on the global TED talks phenomenon. TED stands for technology, entertainment and design and carefully selected speakers are invited to “give the talk of their lives.”

The impressive 2013 TEDxMileHigh speakers’ schedule included 16 innovative Coloradans who were given the unique opportunity to inspire action in an audience ready to learn and be challenged. CU Denver was the first at the microphone, represented by Electrical Engineering Assistant Professor Dan Connors, PhD.

Connors directs CU Denver’s computer engineering program. His topic was computer vision and the impact it is already making on our world. Connors often speaks on the topic to his students and peers, but he jumped at the chance to address the diverse record crowd of more than 1,700 at the Denver Performing Arts Center’s Ellie Caulkins Opera House.

“You never know what’s out there. What new ideas are going to come from it,” Connors said. “Anytime I can expose a new audience to new ideas, I take advantage of the opportunity.” That same opportunity was extended to those invited to set up booths in the TEDx Exhibits Lounge, including CU Denver’s award-winning H2 Eco-challenger motorsports students, and CU Denver’s College of Arts and Media Head of Photography, Carol Golemboski, MFA. The popular exhibits were open for several hours before the speakers made their presentations and during intermission.

The hands-on booth offered visitors the chance to explore the app on their own, discovering its many captivating dimensions. “This was a very inquisitive audience,” Golemboski said. “They asked all kinds of questions. Roxy and I were glad we were both there to talk about our collaboration. She spoke from the digital design side of the project, while I was able to explain my photographic process.”

The H2 Eco-challenger exhibit included the actual car that competed in, and won, the Shell Eco-marathon in the alternative fuels category by using a hydrogen fuel cell to travel nearly 225 miles on the equivalent of one gallon of gas. But the biggest challenge for the team at TEDx was getting the car transported just a couple of miles from the 5th Street Hub on campus over to the Opera House.

When teammates Ronnie Prado and Nick Wager were unavailable, John Van Ngo pushed the car to the exhibit location all by himself. “It wasn’t all that bad,” Van Ngo said, smiling. “I heard lots of comments like ‘nice car.’ The only hard part was waiting for traffic.”

The two CU Denver exhibits were positioned right at the entrance of the Exhibits Lounge and proved to be very popular as crowds of visitors leaned in to learn more. Like Connors, the engineering assistant professor, both the motorsports students and Golemboski enjoyed sharing their projects with a new audience.

“I’m used to attending conferences that are full of artists and photographers, not this random mix of curious people,” Golemboski said. “Since our iPad app is still so new, the feedback from this mainstream group will help to give us a new perspective.”

TEDx exhibitors and speakers are selected to share “ideas worth spreading.” Their messages are intended to educate and inspire change, and to be an exciting conversation about the world’s shared future.

On the topic of computer vision, CU Denver’s Connors alerted the audience that the detailed scope of computer vision is not futuristic, that computers can already take what is invisible to the human eye and make it appear visible. And, he ended with a challenge, asking, “What are YOU going to do with infinite computing power?"

It was the first of many provocative challenges calling the audience to action.  And, that’s what TED and TEDxMileHigh are designed to do.

Send your thoughts and suggestions for the Newsletter.
END_OF_DOCUMENT_TOKEN_TO_BE_REPLACED