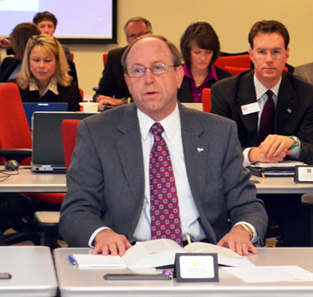 If a lawsuit claiming that Colorado is constitutionally underfunding K-12 education were to succeed, the impact on state funding for higher education would likely be devastating, the state’s attorney general told the University of Colorado Board of Regents on Wednesday.

During the winter budget retreat at 1800 Grant St. in Denver, Attorney General John Suthers described the history of the Lobato v. Colorado case, which began in 2005 when a group of San Luis Valley residents and others sued the state, claiming that, by underfunding schools, the state was ignoring the Colorado Constitution’s promise of “thorough, uniform” education for all students.

A Denver district judge ruled in favor of the plaintiffs late last year, and the state is expected to appeal the decision.

“It’s not unusual for these things to bat around for 10 or 12 years, between courts, the Legislature and the Supreme Court,” Suthers told the regents. “My gut reaction is that no court could order a tax increase (to fund schools).”

As for how the case might ultimately be resolved, Suthers said, “Either it peters out, or at the end of the day the court says, ‘Gee whiz, (lawmakers) came up with another several hundred million dollars (for K-12) and we find that OK. … But historically speakinig, these things can bat around for a long time.”