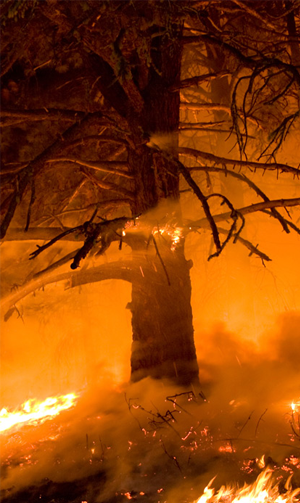 When the Fourmile Canyon Fire erupted west of Boulder in 2010, smoke from the wildfire poured into parts of the city including a site housing scientists from the University of Colorado Boulder’s Cooperative Institute for Research in Environmental Sciences (CIRES) and the National Oceanic and Atmospheric Administration (NOAA).

Within 24 hours, a few researchers at the David Skaggs Research Center had opened up a particle sampling port on the roof of the building and started pulling in smoky air for analysis by two custom instruments inside. They became the first scientists to directly measure and quantify some unique heat-trapping effects of wildfire smoke particles.

“For the first time we were able to measure these warming effects minute-by-minute as the fire progressed,” said CIRES scientist Dan Lack, lead author of the study published Monday in the Proceedings of the National Academy of Sciences.

The researchers also were able to record a phenomenon called the “lensing effect,” in which oils from the fire coat the soot particles and create a lens that focuses more light onto the particles. This can change the “radiative balance” in an area, sometimes leading to greater warming of the air and cooling of the surface.

While scientists had previously predicted such an effect and demonstrated it in laboratory experiments, the Boulder researchers were among the first to directly measure the effect during an actual wildfire. Lack and his colleagues found that lensing increased the warming effect of soot by 50 to 70 percent.

“When the fire erupted on Labor Day, so many researchers came in to work to turn on instruments and start sampling that we practically had traffic jams on the road into the lab,” Lack said. “I think we all realized that although this was an unfortunate event, it might be the best opportunity to collect some unique data. It turned out to be the best dataset, perfectly suited to the new instrument we had developed.”

The instrument called a spectrophotometer can capture exquisite detail about all particles in the air, including characteristics that might affect the smoke particles’ tendency to absorb sunlight and warm their surroundings. While researchers know that overall, wildfire smoke can cause this lensing effect, the details have been difficult to quantify, in part because of sparse observations of particles from real-world fires.

Once the researchers began studying the data they collected during the fire, it became obvious that the soot from the wildfire was different in several key ways from soot produced by other sources -- diesel engines, for example.

“When vegetation burns, it is not as efficient as a diesel engine, and that means some of the burning vegetation ends up as oils,” Lack said. In the smoke plume, the oils coated the soot particles and that microscopic sheen acted like a magnifying glass, focusing more light onto the soot particles and magnifying the warming of the surrounding air.

The researchers also discovered that the oils coating the soot were brown, and that dark coloration allowed further absorption of light, and therefore further warming the atmosphere around the smoke plume.

The additional warming effects mean greater heating of the atmosphere enveloped in dark smoke from a wildfire, and understanding that heating effect is important for understanding climate change, Lack said. The extra heating also can affect cloud formation, air turbulence, winds and even rainfall.

The discovery was made possible by state-of-the-art instruments developed by CIRES, NOAA and other scientists, Lack said. The instruments can capture fine-scale details about particles sent airborne by the fire, including their composition, shape, size, color and ability to absorb and reflect sunlight of various wavelengths.

“With such well-directed measurements, we can look at the warming effects of soot, the magnifying coating and the brown oils and see a much clearer, yet still smoky picture of the effect of forest fires on climate,” Lack said.

CIRES is a cooperative institute of CU-Boulder and NOAA.