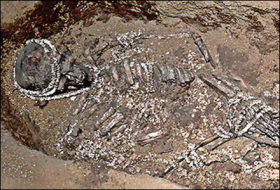 Man in an Upper Paleolithic burial in Sunghir, Russia. The site is approximately 28,000 to 30,000 years old.

A new study from the University of Colorado Denver shows that the earliest human burial practices in Eurasia varied widely, with some graves lavish and ornate while the vast majority were fairly simple.

“We don’t know why some of these burials were so ornate, but what’s striking is that they postdate the arrival of modern humans in Eurasia by almost 10,000 years,” said Julien Riel-Salvatore, Ph.D., assistant professor of anthropology at CU Denver and lead author of the study.  “When they appear around 30,000 years ago some are lavish but many aren’t and over time the most elaborate ones almost disappear. So, the behavior of humans does not always go from simple to complex; it often waxes and wanes in terms of its complexity depending on the conditions people live under.”

The study, which examined 85 burials from the Upper Paleolithic period, found that men were buried more often than women. Infants were buried only sporadically, if at all in later periods, a difference that could be related to changes in subsistence, climate and the ability to keep babies alive, Riel-Salvatore said.

It also showed that a few ornate burials in Russia, Italy and the Czech Republic dating back nearly 30,000 years are anomalies, and not representative of the earliest Homo sapiens burial practices in Eurasia.

“The problem is that these burials are so rare – there’s just over three per thousand years for all of Eurasia – that it’s difficult to draw clear conclusions about what they meant to their societies,” Riel-Salvatore said.

Most burials were fairly plain and included mostly items of daily life as opposed to ornate burial goods. In that way, many were similar to Neanderthal graves.

Early humans and Neanderthals put bodies into pits sometimes with household items. During the Upper Paleolithic, this included ornaments worn by the deceased while they were alive. When present, ornaments of stone, teeth and shells are often found on the heads and torsos of the dead rather than the lower body, consistent with how they were likely worn in life.

“Some researchers have used burial practices to separate modern humans from Neanderthals,” Riel-Salvatore said. “But we are challenging the orthodoxy that all modern human burials were necessarily more sophisticated than those of Neanderthals.”

Many scientists believe that the capacity for symbolic behavior separates humans from Neanderthals, who disappeared about 35,000 years ago.

“It’s thought to be an expression of abstract thinking,” Riel-Salvatore said. “But as research progresses we are finding evidence that Neanderthals engaged in practices generally considered characteristic of modern humans.”

Riel-Salvatore is an expert on early modern humans and Neanderthals. His last study proposed that, contrary to popular belief, early humans didn’t wipe out Neanderthals but interbred with them, swamping them genetically. Another of his studies demonstrated that Neanderthals in southern Italy adapted, innovated and created technology before contact with modern humans, something previously considered unlikely.

This latest study, “Upper Paleolithic mortuary practices in Eurasia: A critical look at the burial record” co-authored with Claudine Gravel-Miguel (Arizona State University), will be published in The Oxford Handbook of the Archaeology of Death and Burial in April. The book reveals intriguing variation in early human burial customs between 10,000 and 35,000 years ago. And this study raises the question of why there was so much variability in early human burial practices.

“There seems to be little rhyme or reason to it,” Riel-Salvatore said. “The main point here is that we need to be careful of using exceptional examples of ornate burials to characterize Upper Paleolithic burial practices as a whole.”