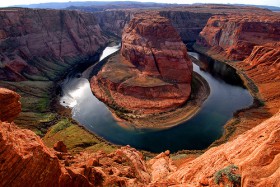 Colorado and other states across the West could see reservoirs dry up by 2057 if current water-management practices in the Colorado River system remain in place as the region continues to warm up, according to University of Colorado at Boulder researchers.

In a new study published in the American Geophysical Union journal, CU-Boulder researchers noted that roughly 30 million people depend on the Colorado River for drinking and irrigation water.

The river features more than a dozen dams along its 1,450-mile journey from Colorado's Rocky Mountains to the Gulf of California. The river system has endured 10 years of drought, said lead study author Balaji Rajagopalan, an associate professor of civil, environmental and architectural engineering.

Rajagopalan, a fellow at CU-Boulder's Cooperative Institute for Research in Environmental Sciences, said Colorado River system reservoirs started out at about 95 percent of capacity when the drought began in 2000, but those levels have dropped to 59 percent of capacity this year, about the same as last year.

The research team examined the future vulnerability of the system to water supply variability, coupled with projected changes in water demand.

"On average, drying caused by climate changes would increase the risk of fully depleting reservoir storage by nearly 10 times more than the risk we expect from population pressures alone," Rajagopalan said. "By midcentury, this risk translates into a 50 percent chance in any given year of empty reservoirs, an enormous risk and huge water-management challenge."

The system's two largest reservoirs, Lake Mead and Lake Powell, can store up to 50 million acre feet of water. As a result, the risk of full reservoir depletion will remain low through 2026, even with a 20 percent stream flow reduction induced by climate change, Rajagopalan said.

However, between 2026 and 2057, the risks of fully depleting reservoir storage will increase seven-fold under current water-management practices when compared with risks expected from population pressure alone, he said.