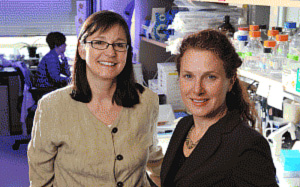 A new study reports that nonsteroidal anti-inflammatory drugs including ibuprofen reduce the severity of postpartum breast cancers in animal models. The information recently was published in the journal Nature Medicine.

“We caution patients and providers that because a mother’s body is undergoing radical changes during this time, we can’t yet speak to the safety of these drugs for women diagnosed with or at risk for postpartum breast cancer, and thus can’t yet recommend NSAIDs as a preventative therapy or cancer treatment,” says Pepper Schedin, Ph.D., investigator at the University of Colorado Cancer Center and professor in the division of medical oncology at the University of Colorado School of Medicine, who teamed up on the study with Virginia Borges, M.D., an expert in young women’s breast cancer who is also at the Cancer Center. First authors of the paper are University of Colorado trainees, Traci Lyons, Ph.D., and Jenean O’Brien, Ph.D.

The story starts with breast involution – the process by which milk-producing cells that are no longer needed are killed and replaced with fat cells. During this time of change, the breast is especially susceptible to the development of cancer. Recent studies show that women who have children before age 30 increase their risk of pre-menopausal breast cancer by 10 percent; women who wait to have children until after age 35 increase their risk by 30 percent. Not only is breast cancer more prevalent in young mothers than women who have not had a child, but cancers diagnosed in the early years postpartum tend to be more aggressive, with increased risk of spreading to other organs. For example, one study reported that women diagnosed with cancer within two years of giving birth had a 40 percent five-year survival rate, as opposed to a 70 percent five-year survival rate for women diagnosed outside the postpartum window.

What this University of Colorado research team discovered is that breast involution shares similarities with wounds, and wounds can cause cells to become cancerous in addition to promoting metastasis of otherwise localized tumor cells. Two wound-like changes that occur in the postpartum breast are an increase in fibrous collagen (the protein that gives flesh structure) and increase of an enzyme called COX-2.

Besides causing inflammation and pain, COX-2 aids the formation of fibrous collagen, which in the process of wound healing serves as a highway along which healthy skin cells travel in order to close the wound. However, this collagen also forms a rich architecture for the growth and spread of cancers. In short, breast involution leads to COX-2, which leads to fibrous collagen, which promotes the release of more COX-2, and this positive feedback loop can help a tumor grow and push into other tissues.

It’s a vicious chain, but one with a weak link: Many drugs exist that inhibit COX-2. These include the nonsteroidal anti-inflammatories (NSAIDs) such as ibuprofen or celecoxib, which is a more targeted COX-2 inhibitor used in other inflammatory diseases like arthritis.

“Inhibition of COX-2 slows the formation of fibrillar collagen and thus both tumor growth and the tumor’s travel into the lung,” wrote Schedin and collaborators. Schedin and the research team found that in postpartum mice, ibuprofen and celecoxib treatment reduced mammary tumor size, collagen architecture, COX-2 expression and breast tumor cell spreading into the lung.

However, recommending ibuprofen for women undergoing breast involution is premature. Schedin and Borges point out that early studies of vitamin A in lung cancer and vitamin E in prostate cancer at first found the vitamins to be cancer-fighting but eventually showed them to be cancer-promoting.

“It becomes a numbers game,” says Borges, “with the benefit of the drug weighed against its dangers. It seems as if the safety of these drugs is self-evident, but it’s only because we don't fully understand the effects of NSAIDs during this unique period of a woman’s life, when her body is undergoing dramatic changes. So it becomes very important to study the effects of NSAID treatment in this particular group of women before we can make any prevention recommendations.”

This is about the fifth step down an extremely promising path toward identifying a simple, inexpensive, effective treatment of postpartum breast cancers. But there are many steps still to go.