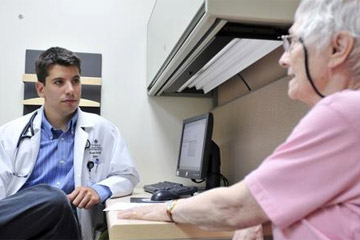 Clinicians often wait too long before talking to elderly patients about giving up driving even though many may be open to those discussions earlier, according to a new study from the University of Colorado School of Medicine and the CU College of Nursing.

“These conversations often don’t happen until clinicians see a 'red flag' which could mean an accident or some physical problem that makes driving more difficult for the elderly,” said Marian Betz, M.D., MPH, at the CU School of Medicine and lead author of the study. “But what’s interesting is that most elderly drivers we spoke with said they were open to having earlier discussions.”

The study, published recently in the Journal of General Internal Medicine, involved focus groups and interviews with 33 drivers over age 65 and eight health care providers including physicians, nurses and physician assistants.  The research was done at three clinics at the CU School of Medicine and drivers were recruited from a local senior center and senior living community.

The study found that while clinicians were often the first to raise the subject of elderly drivers handing over their car keys, they tended to wait for red flags before bringing it up. They also reported that those conversations were usually “unpleasant.”

Elderly drivers, meanwhile, said they were open to these discussions and generally saw their medical providers as fair minded. At the same time, the majority said they didn’t believe their providers were aware of their driving status or ability. The elderly also tended to see a smaller role for family members in conversations about whether they should stop driving.

“Driving is linked to independence and asking for someone’s keys is very emotional,” said Betz, who conducted an earlier study on creating advanced directives to help drivers plan for future changes in driving. “Studies have shown that most people outlive their ability to drive safely by more than six years.”

Betz said health care providers should start conversations with elderly drivers earlier, perhaps at age 65 when Medicare benefits kick in. That way, drivers can be thinking about it years before having to make the decision.

“A primary theme that emerged from this study was the overall importance of improved communication about driving safety,” the study reads. “Both clinicians and drivers supported the idea of regular questioning about driving as a way to make it an easier topic, as patients might be more receptive if they heard it once before.”

The researchers recommended a practice known as anticipatory guidance in gently preparing elderly drivers - by monitoring physical and mental changes - for the day when they could no longer operate a vehicle safely. Doctors could include driving status in their patient questionnaires and talk about it during regular office visits, they said.

“It’s not just about taking the keys, it’s about making plans,” said Betz, an emergency room physician. “Drivers in our studies reported needing help in preparing for that transition, including learning about transportation alternatives.”

Issues surrounding elderly drivers have been around for decades, but with 10,000 baby-boomers turning 65 every each day, it has taken on a new urgency, Betz said.

“It is now a public health issue,” Betz said. “Driving is such an important part of living in America. Mobility is critical, mobility is freedom. But at some point most people will develop difficulties with driving, so we all need to prepare for it.”