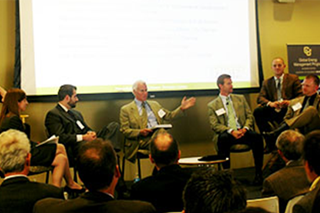 A panel exchanged partisan blows in "The Future We Want: Student Perspectives on Energy Policy and its Ramifications," part of the half-day conference held in the Terrace Room at the University of Colorado Denver. About 200 business professionals attended.

The Republican side criticized President Obama's "all-of-the-above" energy policy, saying it obstructs oil and gas production with unnecessary regulations and squanders largess on the renewables sector. The Democrats argued that renewables are the energy of the future and that leaving energy regulation to individual states muddles accountability and imperils the environment.

Penry said that under the Obama administration, new oil and gas drilling on federal lands is down 50 to 70 percent compared to the Bush years. Clean-burning coal plants and new nuclear power sources have ground to a halt.

"If you look at that bucket, the traditional fossil fuels, this administration has been a lot of talk and a lot of obstruction at the same time," Penry said. Meanwhile, subsidies to green energy have ballooned. "One of the reasons (the president) is vulnerable in the West, I believe, is because he's embraced kind of a balanced energy policy -- certainly not an 'all-of-the-above' energy policy -- but a foolhardy one that as Mitt Romney rightly said doesn't pick winners and losers, but too often just picks losers."

While the Republicans favor lessening regulations and putting states in control, Democrats argue that multiple levels of oversight lead to weakened accountability and that businesses prefer a predictable set of rules.

Kirby argued that President Obama is rightly focused on a long-term policy that allows green energy to flourish, much the way leaders of the past century invested in oil and gas. "It's a basic economic axiom -- if something becomes pervasive, it becomes affordable. All we need to do is make the investment."

Kosdrosky, meanwhile, said the Department of the Interior operates on a "one-size-fits-all" permitting process that stanches federal land drilling. "It really burns me up a little bit when when the administration takes an approach that green energy is what we need to push here and now when, quite frankly, we're leaving leaving a lot on the table in terms of jobs and gross national product. We need to ... be realistic about transitioning away from the fossil fuels and do it in an appropriate manner that sustains the economy and improves our independence, but also improves the quality of life and the incomes of families."

Schmidt argued that the pioneers of hydraulic fracturing, the technology widely used in oil and gas production today, received little, if any, government subsidy. "The spending that came through the stimulus bill indicates to me an unwillingness to wait and let this technology truly mature to a place where it's cost-competitive."

Madden countered that the oil and gas industry has benefited from "hundreds of billions" in government subsidies and is one of the most profitable global industries. She noted that Republican opposition to the Production Tax Credit for renewable energy has resulted in wind-energy job losses in Colorado.

Energy policy's role in job creation was the last topic covered by the panel, which was moderated by veteran TV journalist Greg Dobbs.

"It absolutely has to be a (a job-creation factor) and I think a more diverse energy portfolio creates way more jobs," Madden said.

Penry said that a willingness to compromise is most needed, regardless of which ticket wins next month's presidential election. "These are issues where the public is crying out for -- and I think the country needs -- genuine give and take that results in sensible policies, and we're not getting that," he said.

The Energy Moving Forward forum, which also featured a panel discussion on natural gas and a keynote address by Lawrence Makovich on "The Challenges of the Power Fuel and Technology Mix," was presented by the Business School's Global Energy Management Program.