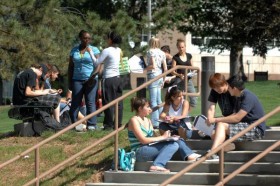 Enrollment is up 6.3 percent at UCCS.

Total enrollment is up at all four University of Colorado campuses, according to preliminary data. Campus officials attribute the growth to a variety of factors, including a faltering economy that has many job seekers looking for new or greater professional training.

Besides the economy, campus officials also credit the university's reputation for supporting high-quality academic programs across the CU system, tuition value in comparison to peer universities, and increased federal funding that enables students to work alongside some of the best minds in the country and on legacy projects that advance science and medicine.

One of the biggest enrollment stories is unfolding at UCCS, the CU system's burgeoning southern Colorado campus, which is reporting its largest total enrollment since being founded in 1965. Some 8,464 students are enrolled this year, a 6.3 percent increase over last year. The campus's profile and reputation have grown in recent years; campus officials tout reasonable in-state tuition and overall value as strong draws for the region's top scholars.

Enrollment at UC Denver's Downtown Campus has risen to 14,041, a 7.3 percent increase over last year. Campus officials attribute the growth to an increase in the numbers of graduate, professional and international students.

"The numbers indicate more people are going back to school to get advanced degrees in this economy, especially those who may not be working," said Barbara Edwards, assistant vice chancellor of enrollment management at UC Denver. "For professionals who are having a harder time finding work, it is a good time to take the opportunity to go back to school and get a more advanced degree and training."

Enrollment also is at record levels at the University of Colorado Anschutz Medical Campus, where the schools of medicine and pharmacy welcomed their largest classes ever. Total enrollment at Anschutz has grown to 3,112 this year, a 4.9 percent increase over data reported for the health sciences campus last year, according to preliminary data.

CU-Boulder could record its largest total enrollment when final data is reported in early October. Fall enrollment this year is approaching 30,000, which is about a 1 percent increase over last year's total enrollment. Last year, the campus recorded its largest freshmen class with 5,833, but campus officials consider that figure an anomaly. This year's new freshmen class numbers 5,550 — still impressive when compared to previous years.

"Even in tough times, CU-Boulder is holding its value and its popularity," said spokesman Bronson Hilliard.