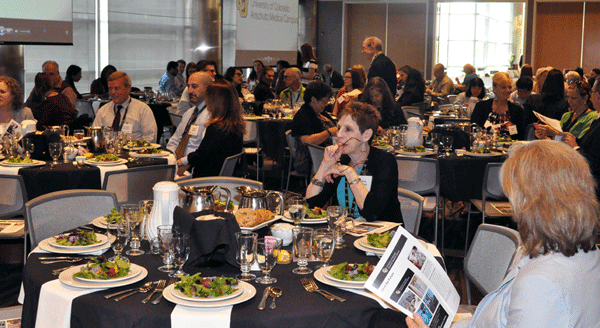 On May 15, nearly 100 current and retired CU Anschutz Medical Campus faculty and staff attended an annual luncheon honoring peers who make financial gifts to the University of Colorado.

During the past five years, said Executive Vice Chancellor Lilly Marks in her remarks, 1,200 faculty and staff have made gifts totaling $6 million to chosen programs on the Anschutz Medical Campus—with donors ranging literally from A (Aagaard) to Z (Zwillich), and amounts ranging from $1 to $750,000.

Marks applauded faculty and staff for digging deep with their efforts and their resources to help CU overcome a challenging funding environment, with uncertain or declining revenue streams from state appropriations and federal research grants.

“The stature of the Anschutz Medical Campus is a direct result of your contributions,” Marks said to the assembled faculty and staff. “You are the heart and soul of this institution, and you have made this place what it is.”

Remarks were delivered by two longtime CU faculty members and donors: Louis Diamond, former dean and professor emeritus of the Skaggs School of Pharmacy and Pharmaceutical Sciences; and Ronald Gibbs, professor and former chair of the Department of Obstetrics and Gynecology and an associate dean of the School of Medicine.

Philanthropist in the pharmacy school

Diamond spoke of having led his school’s move first to a new building on the former Ninth Avenue campus, then to another on the Anschutz Medical Campus, and how philanthropy played a key role in enabling both moves.

“I have spent virtually all my years at CU asking people for money,” he said. “After 20-some years, you realize it’s a good idea to give back.”

Diamond has committed an estate gift that will direct funds from his retirement account to the School of Pharmacy. Doing so, Diamond discovered, not only enabled him to support health sciences at CU, but also had significant positive tax effects (compared with bequeathing assets to children) that enabled him to multiply the impact of his gift.

Making a gift to medicine

Gibbs told the audience he will soon celebrate the 51st anniversary of his first date with his wife, Jane; of their four parents, he said, only one graduated from high school. “Never in those early years,” he said, “did we think we would be able to make a major gift to any organization.”

Thanks to the education both he and Jane received and the rewarding career CU has given him since his arrival in 1989, Gibbs now is able to make a lead gift to an endowment in the Department of Obstetrics and Gynecology. This endowment will support three purposes: the education of residents, research in infectious diseases, and safe and effective family planning.

Gibbs described the evolution of the OB/GYN field from being male-dominated to one in which women now make up 80 percent of OB/GYN residents and 60 percent of faculty. Fundraising continues for the Gibbs Endowment and is a department priority. “I look forward to the completion of the endowment, Gibbs said, “and the fulfillment of these passions.”

You can make a charitable payroll deduction toward a CU program of your choosing. Estate gifts also provide a critical pipeline of support—find more information on bequests and other planned gifts.

Tagged with:
Marks, School of Medicine, Skaggs School of Pharmacy and Pharmaceutical Sciences