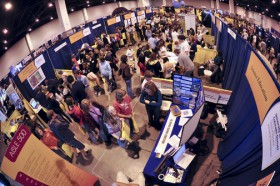 Sharon Unkart, managing director of CASMIC (The Center for Applied Science and Mathematics for Innovations and Competitiveness) at UC Denver, and manager of STEMapalooza, called the event "an incredible opportunity for engagement between the community and the university for an exchange of educational ideas and networking. Given the increased interest in just a year, I see participation rapidly growing on both the attendee and exhibitor levels." 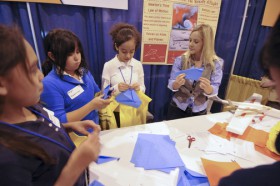 Students learn about the aerodynamics of paper airplanes at a UC Denver booth during STEMapalooza at the Colorado Convention Center on Friday, Oct. 16. (Photo by Glenn Asakawa/University of Colorado)

Popular displays included one sponsored by the U.S. Geological Survey, in which students could drag a rock with a pulley to create small "earthquakes" and track their vibrations on a computer screen. A hands-on "rocketwerks" booth sponsored by the Denver Museum of Nature and Science encouraged young scientists to build paper rockets and launch them to test their designs. At a traveling planetarium, dozens of students lined up with their parents to learn about astronomy. Many participants at the expo wore cardboard Genghis Khan hats provided by the museum to promote its latest exhibit about the Mongolian emperor.

STEMapalooza was sponsored by the Colorado Convention Center, the Colorado Department of Labor and Employment, the Colorado Workforce Development Council, Lockheed Martin, the Center for Applied Science and Mathematics for Innovation and Competitiveness (CASMIC), and Girls Exploring Science, Technology, Engineering, and Math (GESTEM).

UC Denver is part of the Colorado STEM Network, the statewide coalition of businesses, government, education and community groups that was launched by Gov. Bill Ritter in June. The state's focus on STEM education is seen as a way of developing future business leaders, scientists, researchers and educators.