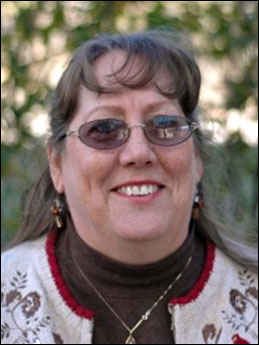 Debbie Lapioli was pragmatic when asked how she would use time off near the Thanksgiving holiday.

"I've got a paper due – that's what I'll be doing on my day off," Lapioli, executive assistant to the vice chancellor for administration and finance, said before elaborating on holiday plans that included visiting family.

It's not the first vacation day devoted to study in Lapioli's 14-year quest to complete a bachelor's degree at UCCS. But it may be the last as she is set to join an estimated 500 graduates Dec. 17 at the World Arena participating in commencement exercises.

For the 56-year-old Lapioli, walking across the stage and accepting her diploma will be the culmination of a dream that began in 1972 when she graduated from high school in Santa Ana, Calif. As she racked up life experiences including two associate's degrees; multiple moves as the trailing spouse of an airman; roles as mother, grandmother and single parent; illness; and a new marriage, she kept the goal of earning a four-year degree in sight.

Applauding her at the ceremonies will be her husband, four children, three grandchildren and several in-laws. Many in the Lapioli section earned degrees from UCCS themselves.

Since 1996, Lapioli has taken classes when she could fit them in between work schedules, raising four children and taking active roles in her church and staff governance at UCCS. She used the employee tuition assistance program for many of her classes and believes the courses not only met her personal goals but helped professionally.

"There's a practical side of seeing what students are going through," Lapioli said. "Particularly when I worked in the dean's office in the College of Education, I think I was better equipped to help students having been in their position."

Lapioli encouraged other staff members to take advantage of the tuition assistance program, which provides up to nine credit hours annually at no charge with supervisor approval. This fall, more than 50 UCCS staff members took courses ranging from general psychology to intermediate German.

Supervisor approval wasn't a problem for Lapioli. Her supervisor, Brian Burnett, vice chancellor of administration and finance, will finish a Ph.D. in education and will participate in Dec. 17 ceremonies. Two student assistants in the vice chancellor's office, Jessica Berry and Brittany Trimble, also will graduate.

Other staff members who plan to graduate include:

Nina Ellis-Frischmann, assistant director at the Teaching and Learning Center, will earn two master's degrees, one in history and a second in leadership. Ellis-Frischmann recently announced her resignation and plans to move to Hawaii.

Melissa Reynolds, academic adviser at the Student Success Center, will earn a master's degree in leadership.

"You can do it," Lapioli offered as advice. "Think of the tortoise and the hare. If you keep steady and keep going, you'll get there."

Send your thoughts and suggestions for the Newsletter.
END_OF_DOCUMENT_TOKEN_TO_BE_REPLACED