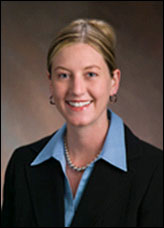 A few years back, Angela Gover, associate professor in the School of Public Affairs (SPA), was ranked seventh nationally among women "stars" in criminal justice and criminology. Now she's climbing the chart: A recent study that re-ranked the top female academic stars in criminology and criminal justice lists Gover at No. 2 or 3.

"This recognition means a lot because it is an indication that my work is having an impact on the field, which is what I've hoped my research would do," she says. "It is also great to see a focus on female criminologists, since the field is changing from the historically male dominated academia to a field where the number and influence of female scholars is increasing."

Gover's research primarily focuses on gender and crime, intimate partner violence, and the criminal justice system's response to violence against women and children. Nearly all of her work is applied in terms of policy and practice. She has an appointment as a Faculty Fellow in SPA's Center on Domestic Violence and is serving as the associate director of the bachelor's program in criminal justice (BACJ) and will become director of the program in June.

"We have known for many years at SPA what a true superstar we have in Professor Angela Gover, with her path-breaking research in victimology and domestic violence, among other criminal justice areas," says SPA Dean Paul Teske. "To see the entire criminal justice research community recognizing her excellence via a rigorous quantitative assessment is gratifying and rewarding."

"Being recognized for publications is important, but I wouldn't be doing what I do if I didn't love it," she says. "I feel fortunate to work at UC Denver and to have great colleagues; I see myself at UC Denver until the end of my career."

As an undergraduate student, Gover saw herself as having a career in crime victim services. After earning her master's in criminology, she worked in the Maryland Governor's Office of Justice Administration and interacted with programs throughout the state that served victims of crime.

"I thoroughly enjoyed that work but realized that my passion was focused on the academic side of victimization issues," she says. This passion has greatly benefited the area of policy and practice in the field of criminal justice and criminology as well as SPA students in the criminal justice programs.

"I would hope that the ranking may impact the prestige of the program and would be an attraction for potential students who are interested in graduate education in the areas of violence against women and gender and crime," Gover says.

Send your thoughts and suggestions for the Newsletter.
END_OF_DOCUMENT_TOKEN_TO_BE_REPLACED