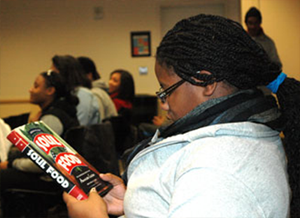 An attendee of the "Soul Food" presentation looks at Adrian Miller's book as part of the Black History Month Celebration on Feb. 7

The textures. The flavors. The history.

Adrian Miller sprinkled personal observations, research and humor into his "Surprising Story of Soul Food" on Friday. Soul food proved to be a tasty topic at the Black History Month Celebration: "A Healthy World of Living and Learning" at the Tivoli Student Union.

The event was presented by the University of Colorado Denver Black Staff and Faculty Affinity Group. About 25 students, many of them high school students visiting CU Denver from Aurora Central and Hinkley high schools, attended Miller's spicy tale of a uniquely American cuisine.

Other attendees enjoyed Black History Month breakout sessions on "Succeeding in Corporate America," "The Disparity of Obesity in the African American Population" and "Genealogy and Ethnicity" as well as trivia games and exhibits.

Miller is a graduate of Aurora's Smoky Hill High School who earned a law degree at Georgetown University and went on to work for President Clinton (One America initiative) and Colorado Gov. Bill Ritter (senior policy analyst). In 2011 he decided to write a book about soul food, the traditional food of African Americans. As part of his research, he ate at 150 soul food restaurants in 35 cities and 15 states.

"I'm not a chef. I'm just a curious guy who saw an opportunity and ended up writing a book," he said. "... Nobody had really done this kind of book."

He went back to the cuisine's roots in West Africa and discovered that soul food has an undeserved reputation as being unhealthy. "When you want to understand soul food's story, you really have to understand how people moved." Miller explained how enslaved Africans brought their food preferences to the United States, and later as free citizens migrating across the country to escape the South's unfair sharecropping system.

Miller said "soul food" -- "his looks are my soul's food" -- first appeared in English in Shakespeare's first play, "The Two Gentlemen of Verona." "This master of word play is playing the tangible off the intangible," he said. "That gets to the real root of soul food, because it's saying we as African Americans are the most soulful people because we have been oppressed but we've been able to endure and overcome despite that oppression."

Miller, a certified barbecue judge, shared photos and stories from his national soul food tour, including regional specialties such as hot sauces, "chicken and waffles" a "koolickles," which is a dill pickle soaked in red Kool-Aid. He asked the students about their favorite soul food dishes, eliciting discussions about chitlins, black-eyed peas and the best fried chicken joints in Denver.

He noted that the strongest current trends in soul food are vegan and upscale fare. During the years of slavery, African Americans ate mostly vegetables and seasonings rather than meat. "So as much as vegetarian and vegan is cast as a departure from soul food, it's really a homecoming."

He stressed that food lovers should take note when someone they love is making soul food. "Try to pick up what they do, because a lot of times people are taking their recipes to their grave and we're losing that heritage," he said. "So please try to write down those recipes."