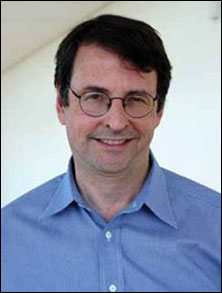 More than half of children diagnosed with ependymoma brain tumors will have them recur after standard treatment — surgery and radiation — and lead to death. University of Colorado Cancer Center researcher Nicholas Foreman, M.D., calls it "one of the most significant problems in pediatric neuro-oncology."

Foreman, director of pediatric neuro-oncology at The Children's Hospital and professor of pediatrics at the University of Colorado School of Medicine, and colleagues last year identified the reason why half of the tumors recur. He has just been awarded a $1.2 million, four-year grant from the National Cancer Institute to dig deeper into the discovery that expression of certain genes linked with immune function predicted good outcomes.

About one in 11 pediatric brain tumors are ependymomas, with about 200 new diagnoses of the disease in the United States each year. Brain tumors are the most common cause of childhood cancer death, according to the National Cancer Institute.

"As we looked closely at the tumor cells, we realized this immune expression wasn't a function of the tumor, but of the immune cells which, in some cases, were in large quantities in the tumor," Foreman said. "It turned out to be the first demonstration in any brain tumor that the immune status of the individual at diagnosis is directly related to his or her chance of being cured."

The researchers also found that certain aspects of the immune function could be blocking treatment's effectiveness, which flies against common belief that all immune reactions to a tumor are positive. Activation of macrophages, a type of immune cell, could trigger release of antibodies that work counter to treatment. These antibodies might serve both as a marker for poor outcome and a treatment target, Foreman says.

"The immune system is more complex than people had realized," he said. "Using this new grant, we hope to identify which parts of immune function is good for killing these brain tumors and which parts help keep them alive or help them grow."

Foreman's work is based on a human model of the immune system and outcomes. Most other experiments have been done in animal models, which might work differently than human systems.

In the long run, Foreman hopes the studies lead to a blood test that will tell doctors at diagnosis whether a child will have a good or poor outcome with standard treatment, and a method for manipulating patients' immune system during standard treatment to make it more effective.

The discovery was published in the Nov. 16, 2009, issue of the Journal of Immunology by Foreman and colleagues from the School of Medicine and Children's Oncology Group, a national research group. The experiments were initially done using tumor tissue samples Foreman began collecting when he arrived in Denver in 1995. The new studies will be done on tissue collected by centers across the country.