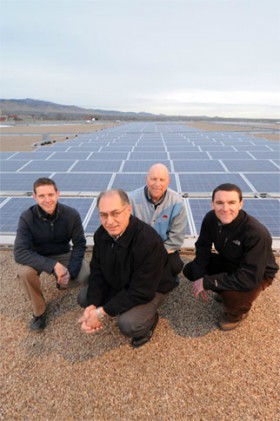 Casey A. Cass/University of Colorado

Solar panels installed at the University of Colorado at Boulder on the roofs of the Coors Events/Conference Center, Housing System Maintenance Center and Wolf Law Building will produce 140,000 kilowatt-hours of energy per year -- enough to power 20 medium-sized houses.

The solar energy will go back into the buildings that hold the panels. It also will contribute to a cleaner energy grid and the fulfillment of Colorado Amendment 37, passed by voters in 2004 to mandate 20 percent use of renewable energy statewide by 2020.

The solar panels are initially free of charge to CU-Boulder because of a partnership with Centennial-based Rockwell Financial Group. The partnership allows CU-Boulder to reduce its carbon footprint through use of the newly acquired technology, while Rockwell receives monetary incentives, some of which CU-Boulder is not eligible for because of its tax-exempt status.

"This project had specific financing goals on top of our continued campus sustainability objectives," said Moe Tabrizi, CU-Boulder's energy conservation officer. "The university is not a tax entity and if we would have done this project on our own, we would have left a significant rebate, tax credits and a depreciation deal on the table."

Rockwell Financial Group receives a one-time, per kilowatt-hour installation rebate from Xcel Energy amounting to $200,000, as well as federal tax credits and depreciation charges. The company also has the opportunity to sell unused solar power back to Xcel Energy at a premium rate of 11.5 cents per kilowatt-hour. However, all solar power generated by the panels is slated to be used by the CU-Boulder campus at this time.

In seven years, CU-Boulder will have the option of buying the solar panels at a fraction of their original cost and also will be able to sell unused solar power back to Xcel Energy.

The Coors Events/Conference Center and the Housing System Maintenance Center each received 210 solar panels; the Wolf Law Building received 52. Tabrizi is working toward solar panel installations on every flat roof on campus, but Xcel Energy limits the amount of incentives accrued by one property. CU-Boulder is negotiating more installations on buildings off the main campus.

"CU-Boulder's solar panels are another step in reaching the carbon reduction goals we've set over the years," Tabrizi said. "From the University Presidents' Climate Commitment in 2007, the Colorado governor's 'Greening of State Government' executive order in 2007 and our own carbon neutrality plan set last fall, along with the ongoing support of Frank Bruno, vice chancellor for administration, we are moving forward on reducing our nonrenewable energy consumption 20 percent by 2012."

Suntech Power manufactured the solar panels and Bella Energy of Louisville carried out the project design and installation, which was completed over eight days in November and December of last year with the oversight of a CU-Boulder project management and engineering team.