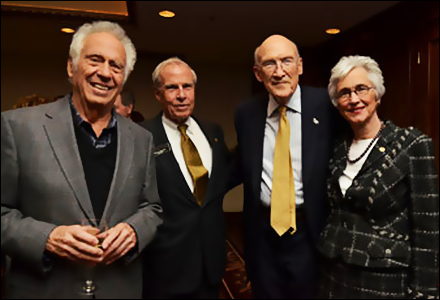 If America can end its addiction to debt, believe again in shared sacrifice and swap out myth for math, it just might reverse the nation's financial free fall.

Retired U.S. Sen. Alan Simpson brought that sobering message and his renowned tart humor to the 2013 Celebration of Success dinner on May 1. The Celebration of Success, an annual fundraising event for the University of Colorado Denver Business School, has in past years featured keynotes by Mayor Rudolph Giuliani, President George Bush, Prime Minister Margaret Thatcher and former Secretary of State Colin Powell.

This year's event, which again sold out the Imperial Ballroom at the Grand Hyatt, also featured the announcement by CU President Bruce Benson and University of Colorado Denver Chancellor Don Elliman that furniture mogul Jake Jabs has donated $10 million to the Business School. His pledge nearly doubles the largest prior cash commitment to CU Denver. Jabs, founder and CEO of American Furniture Warehouse, received a standing ovation from the 500 people in attendance.

Simpson, a Republican, and Erskine Bowles, a Democrat, knew they'd stir the pot when they were appointed co-chairs of President Obama's Deficit Commission, especially when they targeted the sacred cows of tax breaks, entitlement programs, health care and defense spending to pare down the exploding federal deficit. For more background about the Simpson-Bowles plan and the Celebration of Success fundraising event click here.

"We knew we'd be savaged for (these proposals), but we weren't savaged at first because everyone laughed at what we were doing," said Simpson, 81. "Now this thing has got some traction, and, boy I tell you, the heat is heavy and it's going to get a helluva lot heavier."

Guest moderator Cole Finegan, a partner at the legal firm Hogan Lovells, sat on the stage with the retired Wyoming senator, who was born in Denver. Finegan asked questions about the Simpson-Bowles plan that outlines $2.4 trillion in deficit cuts to be made between 2014 and 2023. President Obama has brought forward a plan that offers $1.5 trillion in savings in that period.

Simpson criticized politicians on both sides of the aisle, saying their cowering to special interest groups has led to a nation saddled with $240-billion-a-year in interest costs. "In 10 years it will be a trillion bucks down the rat hole. So the tipping point (to financial disaster) will be from inflation and interest rates kicking up," he said. "You know who gets diddled in that process? The little guy."

Simpson said that when he and Erskine, President Clinton's chief of staff, first began working on the deficit commission, they thought they were doing it for the sake of their grandchildren. They didn't want to be a part of the first generation in America who left their young people worse off than they were. But now they realize they're doing this work for Americans of all ages.

"Really, it is to challenge people to think and to use math instead of mystery and not be sheep led around by talk radio and people on television from the right and the left who don't know crap," he said. Simpson added that he is optimistic that solutions will come and that people can get more information at Fix the Debt.

This year's event raised more than $200,000 to help 100 talented students earn a college degree. Many scholarship recipients attended the Celebration of Success dinner, including CU Denver student Danielle Worthman who took the podium and talked about "My Way Forward."

Simpson said he had the pleasure of meeting with the students, including Worthman, earlier in the evening. "They are the most remarkable group of business students -- you should all be very proud."

Elliman noted that CU Denver Business School students will benefit from the expanded programs that will result from Jabs's donation. He said Colorado has one of the nation's leading rates of entrepreneurship, "and this gift will allow the University of Colorado Denver Business School to dramatically expand its entrepreneurship education, its research and its programmatic reach, and thanks very much to Jake for that."

Sueann Ambron, dean of the Business School, added, "This is truly a significant gift for the Business School, for Colorado and for the West. ... The Jake Jabs Center for Entrepreneurship will accelerate the way we educate students, partner with companies and launch a new generation of entrepreneurs. Jake, I just want to say very personally, what a gift of the heart. You are so generous with your community. Thank you."

Over the years, Denver's business community has joined with the Business School to raise more than $3.5 million, benefiting thousands of students. Also, several deserving faculty members have been awarded term professorships.