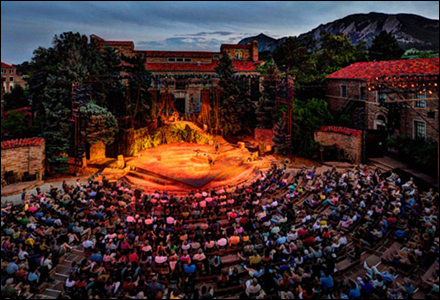 This summer of Shakespeare under the stars promises to be particularly special.

The 56th annual season of the Colorado Shakespeare Festival will feature a classic lineup — a comedy, a tragedy, a history — alongside a hilarious Shakespeare sendup and a return engagement of an off-Broadway hit.

But if anything, expect the unexpected, as two veterans and two of CSF’s favorite comic actors take the helm and offer their own visions, from the exotic to the traditional.

On deck for the season are the beloved comedy “A Midsummer Night’s Dream”; the hilarious 37-plays-within-a-play, “The Complete Works of William Shakespeare (abridged),”; the dark tragedy of “Macbeth”; and “Richard II,” cited by many actors and directors as their favorite play in the canon.

There also will be two very special performances of Tina Packer’s “Women of Will: The Overview,” fresh off its successful runs off-Broadway and in Prague.

“This season is fantastic because it’s so well-balanced,” says Timothy Orr, interim producing artistic director. “And we’ve got some fresh, brand-new directors who are making their CSF debuts.”

Directors Geoffrey Kent (“A Midsummer Night’s Dream”) and Gary Wright (“The Complete Works …”) step into directors’ roles for the first time at CSF following many seasons as favorite comic actors.

“These are two of the funniest actors I’ve ever worked with,” Orr says. “We are thrilled to see what they will do when they’re in charge.”

Kent — who won raves for his work in “Noises Off” at CSF in 2012 — says this year’s “Midsummer” will remind audiences of both “Downton Abbey” and “The Great Gatsby.”

“Set in the 1920s British countryside, you’ll find your toes tapping to a jazz soundscape, people with rude mechanical clowns, a new take on Shakespeare’s famous lovers and fairies chock full of magic and attended by puppets,” he says. “Fun, fast and great for the family and newcomers to Shakespeare.”

Wright’s job is to wrangle three actors (“These guys are painfully funny,” Orr says) in a semi-free-form take on all 37 of Shakespeare’s plays crammed into a couple of hours.

“If you can imagine Shakespeare’s plays as innocent pedestrians, our show is a speeding, out-of-control clown car, running them over, sometimes individually — ‘Titus Andronicus,’ ‘Othello,’ ‘Macbeth’ — sometimes in wholesale groups — the comedies, the histories,” Wright says. “In certain cases, we’ll run ’em down and then back over ’em a couple of times for good measure — can you say ‘Hamlet’?”

For a walk on the darker side, Jane Page returns to CSF for the first time since her smash-hit 2009 production of “To Kill a Mockingbird” for a brooding “Macbeth” set amid the harsh landscapes — both literal and political — of Soviet-occupied Afghanistan.

“I decided to reference this production to pre-Taliban Afghanistan because it evokes a world that is at once exotic, dangerous, familiar and unknown,” Page says. “But it’s also a world with which we have a modern connection.”

“‘Macbeth’ is a story about recurring violence, the cycle of violence, something that CSF is exploring with its anti-violence school tours of ‘Twelfth Night’ and ‘The Tempest,’” Orr says. “We’re excited to see this in a context so relevant to our own time.”

James Symons will direct his 11th CSF play — more than any other director — with a spare and traditional rendering of “Richard II.”

“Willful. Wasteful. Arrogant. Young King Richard II was all of these; but he was also the smartest fellow in any room. ‘Richard II’ is the story of a young king’s determined but doomed efforts to hold on to his crown — and his life,” Symons says.

And in a very special engagement, Tina Packer and Nigel Gore return to CSF after their hit 2012 run of “Women of Will: The Full Cycle” for just two performances of  “The Overview,” which has been playing off-Broadway and has become an international sensation. The Denver Post says, “The pair have an … astonishing chemistry as they inhabit Shakespeare’s creations.”

“They perfected this at CSF last summer for their off-Broadway opening, and after CSF this season ‘Women of Will’ goes to The Hague. You don’t want to miss this,” Orr says.