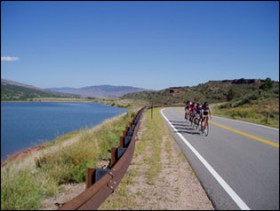 Considered one of the state's premier cycling events, the classic started in 2003 as a way of raising scholarship funds for promising students studying at the University of Colorado at Boulder College of Arts and Sciences. It has become the college's top fundraiser and its largest funding source for student scholarships, said Dean Todd Gleeson, who founded the event.

Since the ride's inception, cyclists have raised more than $1 million for some 300 student scholarships. This year's goal is to raise $300,000. Recently, an anonymous donor pledged to match all donations up to a total of $100,000, which means that a $5 donation will become a $10 gift.

Organizers expect some 2,500 cyclists to participate in this year's event, which will take place on Sunday, Sept. 13. 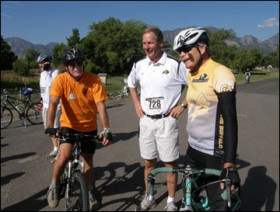 "The BBC represents leaders of the community and the college collaborating on one of the core missions of the university: to provide an Association of American Universities-caliber education to Colorado students," Gleeson said. "That the citizens of Boulder organize a cycling event for the Front Range that supports 101 scholarship students who hail from across Colorado is something that both the community and the university can be very proud of."

Gleeson said many CU alumni and friends of the university have helped with the cycling event over the years. A 20-person organizing committee meets regularly, and some 300 volunteers help coordinate the event each year.

CU-Boulder Chancellor Phil DiStefano has pledged to ride this year, and UC Denver Chancellor M. Roy Wilson, an avid cyclist, has ridden in the ride before plans to do so again this year.

As in the past, riders will be able to select from several courses that run from the 14-mile "Little Buffalo" to the 100-mile "century" course, which winds through scenic rural areas of northern Boulder and southern Larimer counties. The "Little Buffalo" passes through south Boulder, winding along the city's bike paths and residential streets. The century includes more than 30 miles of road, a climb to Carter Lake, and a significant climb on either side of the Horsetooth Reservoir aid station.

Organizers said all of the rides start and finish with live entertainment at Benson Field, adjacent to Folsom Field, and include food, drinks, a post-ride celebration, and drawings for gifts that include bikes, clothing, gift certificates and other items. Riders can sign up as individuals or ride with a team.

Gleeson, who rides an 8-year-old Bianchi Talledega, has been riding since graduate school, and considers himself more of a commuter biker than a serious road cyclist. He said he logs most of his miles riding back and forth between his home in Louisville and the CU-Boulder campus, and doesn't mind the extra weight of his older bike because he focuses more on physical activity and not speed.

Two weeks before this year's classic, he and other organizers plan to ride the century route, looking for potholes and other obstacles they can mark for cyclists. More than half of the cyclists who participate in the annual event choose to ride the century route, and Gleeson said the middle 50 miles of the route, particularly in Larimer County, features stunning vistas.

"The day of the ride I generally start early, ride with the century riders out to Hygiene north of town, then turn back and return to campus to ride the Little Buffalo with the chancellor and the families," Gleeson said. "It makes for about a 50-mile day."

The cycling classic "has been a productive and enjoyable mechanism that the college has used to forge strong ties with the Boulder business community," Gleeson said. "The event has also grown to become our most important fundraising event of the year, and the largest single source of student scholarships in the college. Both aspects are very important."

Send your thoughts and suggestions for the Newsletter.
END_OF_DOCUMENT_TOKEN_TO_BE_REPLACED