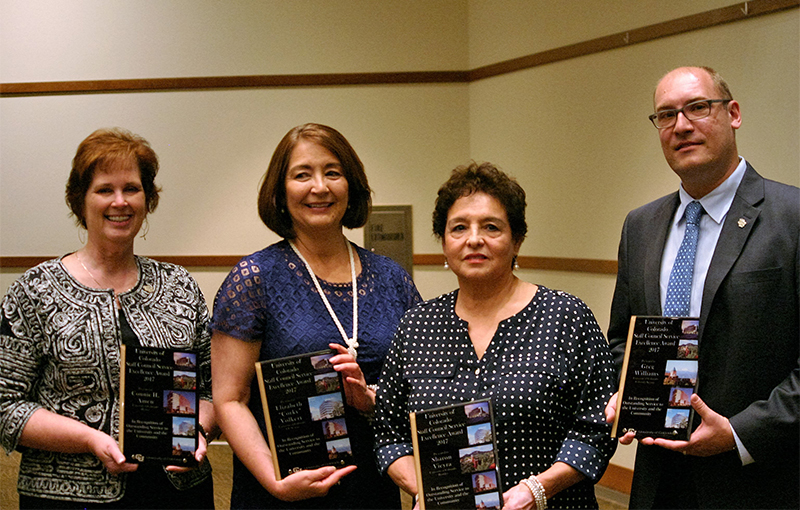 The honorees, from the campuses and system administration, received a plaque and a $1,000 award. Those recognized during the luncheon were:

She is the go-to person when expertise is needed concerning human capital or budget matters, according to her nomination letter. She served on a special task force to assist in the resolution of issues in a nonfunctioning payroll system. She also is the lead coordinator of an annual Halloween party and has organized a school community fund used to send flowers on behalf of the college as colleagues celebrate milestones or struggle through mishaps. Her nominators call her the “glue” of the Business School, and she is credited with streamlining her own and her team’s processes and procedures.

She has continually upgraded her own skills through certifications from SHRM (Society for Human Resource Management) and PHR (Professional in Human Resources). She also contributes to these professional organizations with her own time, expertise and finances. In addition, she is a regular blood donor. Her son serves in the military, and when she found out that several of his colleagues were homesick, she put together care packages to be distributed among the soldiers in her son’s group.

“Working at CU Denver has been a wonderful, wonderful experience,” she said. “I work with amazing people and I always tell them that they are the ones that make me look good. Thank you for all the support.”

Sharon Vieyra, executive assistant in the Office of Diversity, Equity and Community Engagement (ODECE) at CU Boulder, was described by her nominators as “the all-knowing seer around diversity and inclusion; she is grace in the face of adversity; she is the vigilant sentry.” Before working in ODECE, Vieyra held a position in the College of Business Development Office and the National Center for Atmospheric Research (NCAR).

Vieyra has been a constant in the 18-year history of ODECE (formerly the Office of Diversity and Equity), and throughout that time has provided not only stability, but also context and instruction concerning a variety of critical diversity and inclusion issues, according to her nomination letter. She has used her influence to help shape policy and events, an example of which is the Equity and Excellence (E&E) Celebration, held every spring semester to honor graduating underrepresented and first-generation students. She lobbied successfully to reshape the event from a catch-all ceremony to one that specifically focuses on celebrating graduating seniors.

For 10 years, Vieyra has volunteered with the Hispanic Alumni Association, helping to host fundraisers for scholarship dollars that were matched by CU. She persuaded Ofelia Miramontes, the first associate vice chancellor for the Office of Diversity and Equity, and her spouse, to donate toward the scholarship fund. When Ofelia Miramontes passed away, the Ofelia Miramontes Friend Scholarship was created, and as a result of Vieyra’s volunteer work, she was the first to receive the award.

She has volunteered on the Boulder Staff Council, serving on the Outreach and Years of Service committees. She “remains one of the most committed, passionate, dedicated members of the Boulder Staff Council, and her contributions have significantly improved the way Staff Council operates and will continue to operate,” according to her nominators. She has served on the Alumni Selection committee; the President’s Diversity Award committee, identifying individuals whose service has contributed to diversity and inclusion systemwide; and the CU Boulder Chancellor’s Employee of the Year selection committee.

Outside the CU community, she has worked for the past six years with the Boulder County Latino Women’s League (BCLWL), assisting young Latino women who dreamed of attending college, including in the mentorship program. She continued to work with these young women throughout their time at CU, helping them overcome hurdles, including providing money, food or clothing appropriate for student job interviews. She also convinced one donor to contribute to help students with tuition and books when a lack of funds threatened their ability to continue toward graduation. The women that Vieyra helped, all first-generation college students, went on to take positions such as a grade-school teacher, a CPA working for Ernst and Young, an intern working with a veterinarian, a doctor now starting her residency, and a graduate with an engineering degree.

Vieyra thanked her nominators, co-workers and supervisors. “I would also like to thank all staff from all four campuses because I do believe that we all work hard together and we do make this a great university.”

Elizabeth Volkert, internal audit manager in system administration, oversees internal operating controls, processes and practices for the university to ensure compliance with regulations and policies. She oversees audit and consulting projects and ensures all review steps are completed and reviewed internally, while providing support and education to other team members.

She has served on the President's Task Force on Efficiency, working to improve the efficiency and effectiveness of system administration and its interactions with the university community, and on a hiring search committee. Her focus has been on streamlining and simplification of policies, administrative review units, the Grant Street efficiency group, shared practices, customer service training and system administration operating efficiencies.

Outside of her work at CU, she serves as a finance coach, teaching people how to save money and get out of debt. She also facilitates Financial Peace University classes at her church, and also works with seniors to ensure they have the information and forms needed to save on property taxes. She is a member of the Association of College and University Auditors (ACUA) and has contributed to fundraising that benefits sporting activities in which her sons participated.

“This is an honor and I am humbled by it,” she said. “I encourage you all to do your best and participate in community service because it is important that we help each other.”

Gregory Williams, director of Networks and Infrastructure at UCCS, is responsible for the overall planning, organizing and execution of all network and infrastructure functions within the Information Technology Department. That means ensuring peak performance for network and telephone operations and recommending upgrades or changes for future needs.  He also served on the assistant vice chancellor/CIO search committee.

“Greg contributes to … the mission of UCCS beyond the expectations of his role as the director of infrastructure,” said his nominator, Gregory Krems. “Most of the network and information security that we enjoy on this campus is a result of his sharing of his personal time and energy. He is an outstanding mentor that continually motivates, inspires and leads those around him.”

Williams has served as the director for the Sparks program, a subset of the Awanas Club, since August 2016. The Sparks program engages children who are in kindergarten through second grade to share their faith. The children can earn “Awana bucks” to buy prizes in a store or they can turn in their bucks to vote for a leader to get a pie in the face. Last year, his group saved all their money to guarantee that he would get the pie.

Williams’ 8-year-old daughter was diagnosed with Type 1 Diabetes two years ago, and since that time, he has been an integral part of the American Diabetes Association. His daughter is a youth ambassador for the association, therefore making Williams an ambassador as well.

Using his knowledge of technology, Williams has helped several organizations maintain the security and integrity of their websites, as well as redesigning and moving the sites to better platforms. He allows organizations to use his personal storage servers free of charge, and also has designed websites, databases, and interfaces without pay for groups or companies that are just starting out.

“I couldn’t do it without all” of my colleagues, he said.

She also offered advice to members of the campus staff councils about how to reach their goals. “Sit down and strategize, which is probably the most effective way to have your voice heard,” she recommended. Only “champion one or two issues over the course of the year.” She also advised attendees to keep an open mind as they work with administration to advance those priorities, keeping in mind the campus goals as well.

“It’s not always a give situation; you don’t always want to be in the situation of asking for something. You also want to be a good partner and help resolve the issues on your campus,” she added.

Nesbitt also presented “Lessons Learned in Leadership,” offering tips on how to be a good leader for both the university and for supervised team members.

“I was lucky to have him as both co-worker and friend. What a gentle, patient soul, except when his passion and drive took over. … As our partnership grew, I learned about Jim’s passion for music. My husband and I went many times to see Jim go to town on that trumpet. What a joy! In addition to seeing him play, we were able to meet his wonderful wife, Roberta. A match made in heaven, you could say about Jim and Roberta. … There are only a few people in your life that you can call a friend that are pure and golden through and through. My friend will be missed.”

Dages’ wife, Roberta, who attended the luncheon, said, “Staff Council was the highlight for Jim working at CU. He put on that shirt and his shoulders went back and his pride went up and he knew he was going somewhere where people cared, where people listened and where people tried to make change.” She said she still has Jim’s Staff Council shirt hanging in her closet.