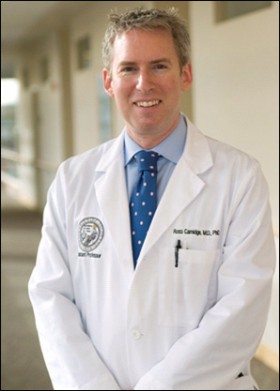 A discovery at the University of Colorado Cancer Center shows testing lung cancer on a molecular level can produce new insights into this deadly disease.

In October 2010, Camidge and colleagues published a study in the New England Journal of Medicine showing more than half of patients with a specific kind of lung cancer respond positively to a treatment that targets the gene that drives their cancer. Some 57 percent of patients with anaplastic lymphoma kinase (ALK) positive advanced non-small cell lung cancer responded to a tablet called crizotinib, an investigational ALK inhibitor.

"We had been running a home-grown clinical trial with pemetrexed in lung cancer when I noticed that some patients were doing astonishingly well on this chemotherapy," said Camidge, associate professor of medical oncology at the University of Colorado School of Medicine. "Pemetrexed is not like most other chemotherapies. It can be given for long periods of time, often with little in the way of side-effects. However, when someone is given pemetrexed, on average it only takes three to four months before their cancer starts to grow again. But certain people in this trial were responding to the treatment for a year or more. When we started to test their cancers at the molecular level, almost all of those "super-survivors" turned out to be ALK-positive. As ALK-positive lung cancer is only present in about one in 20 people, this was clearly not a coincidence."

Finding that ALK positive patients can be super sensitive to pemetrexed may have multiple implications for the 20,000 patients who are thought to develop this subtype of lung cancer every year in the United States.

"To get a new drug, like crizotinib, approved, it is usually compared to some standard chemotherapy. These new results highlight the importance of choosing that comparator carefully, so a beneficial effect is not missed just because the standard treatment does far better in a specific subgroup than it does in an average population," Camidge said. "This information could prevent the current crizotinib development plans from tripping over an unsuspected hurdle and helping to ensure that good new drugs get licensed when they should."

Knowing there is an established drug that could produce results comparable to the latest targeted therapies such as crizotinib may also help ALK-positive patients around the world. "These results suggest that if you are ALK positive and you don't have access to the experimental drug crizotinib then think about trying pemetrexed instead. It will also be very interesting to see if pemetrexed works as well in ALK positive patients after the crizotinib stops working," he said.

The discovery may even help to identify these rare ALK positive patients in the first place.

"Although good responses can occur in other subtypes of lung cancer, if you or someone you know is having a gang-buster response to pemetrexed and they haven't already been tested for ALK – getting tested is probably the next thing to do," Camidge said.

The CU Cancer Center is an international leader in the molecular testing of lung tumors. In early 2008, the center started testing everyone with lung cancer for genetic mutations. Initially they only tested for two mutations, but now they test for 10 different molecular subtypes of lung cancer, including ALK.

"We test all our lung cancer patients at the Cancer Center," Camidge said. "We decided early on that it was better to be a leader than a follower in this regard. It's really pleasing to see how some of the breakthroughs we have been involved with are influencing the field. Genetic testing is now slowly becoming more common, both in the community and at other major centers. We hope our results offer physicians another incentive to order the testing for their patients. At the end of the day, the most important thing is to get the right medication into the right patient at the right time."

Camidge said while this novel discovery identifies pemetrexed as a one of the therapies of choice for this new subtype of lung cancer, it is just the beginning.

"When you break one disease into multiple different diseases at the molecular level, the possibilities are endless. The excitement we are starting to feel at the Cancer Center is comparable to what the original physician-scientists must have felt a hundred years ago when brand new diseases were being described for the very first time."

Send your thoughts and suggestions for the Newsletter.
END_OF_DOCUMENT_TOKEN_TO_BE_REPLACED