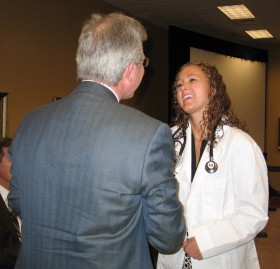 Chair of the Department of Family Medicine Frank DeGruy, MD, MSFM, talks with Maggie Tillquist after she receives her stethoscope.

The new students received white coats and stethoscopes during a special matriculation ceremony on Aug. 13. In addition, they received advice from keynote speaker Daniel Johnson, an engineer-turned-physician who urged the first-year scholars to exhibit curiosity and humility.

Johnson, chief of palliative care for Kaiser Permanente's Denver region, called the traits "the most important attributes for doctors."

During his talk, Johnson spoke of the need for the medical students to learn to connect with patients and their families, as well as with classmates and other physicians. He also emphasized the importance of physicians admitting any shortcomings and seeking the support of others when they need it. 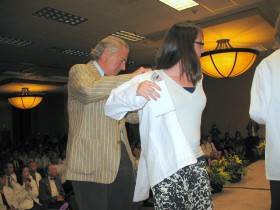 The school also inducted fourth-year medical students into the Gold Humanism Honor Society, and presented Ben Honigman, MD, head of the division of emergency medicine, with a faculty teaching award.

More than 800 family members and friends attended the ceremony. 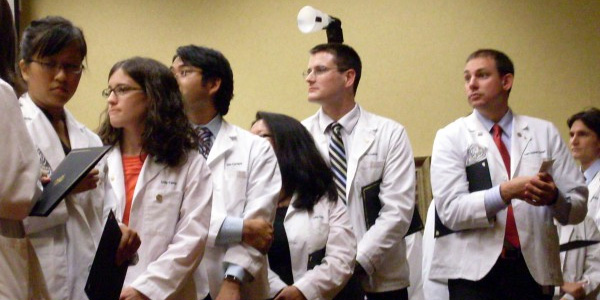