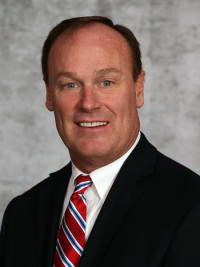 Note: This first appeared July 17 as a breaking news item on CU Connections.

George currently serves as president of business operations for Major League Baseball’s Texas Rangers and has spent more than three decades as a sports executive in the collegiate and professional ranks, including a stint as assistant athletic director for football operations for CU from 1987-91.

“I am delighted that Rick has accepted our offer to lead our athletic department,” DiStefano said. “Rick’s financial and management acumen, his networking and relationship development skills, and his enthusiasm, work ethic and principled leadership all make him the ideal leader for CU athletics at this important and challenging moment in our history.”

George said he was delighted to be returning to the campus that played a key role in shaping his career.

“I am honored to be selected as director of intercollegiate athletics at CU-Boulder,” George said. “CU is a special place for my family and me, and this is a marvelous opportunity at a great university in the best collegiate athletic conference in the country. I am looking forward to getting back to CU to begin working at this great institution.”

George has served as COO of the Rangers since 2010 and recently as the president of business operations, and was a member of the front office staff for the team’s first-ever American League championship that year and its second in 2011. Before that, he served as executive vice president and chief of operations for the PGA TOUR from June 2008 until joining the Rangers. While with the TOUR, he worked with the corporate marketing department in renewing sponsorships and creating new events. He also oversaw the Tournament Business Affairs division that worked with Tournaments to increase tournament revenue.

He also worked for the PGA TOUR as president of the Champions Tour from 2003-2008, where he increased revenues and sponsorships. From 1998-2003, George served as President and CEO of the Fore!Kids Foundation, a 501c3 organization that raised money for children’s charities via golf-related events, where he led re-branding and organizational efforts that resulted in increases in charitable giving to the Foundation.

At the collegiate level, George has worked in three major conferences (Big Ten, Big Eight, Southeastern) in football operations, beginning with the University of Illinois (where he was a four-year starter in football and a 1982 graduate) as football recruiting coordinator (1983-87).

CU Interim Athletic Director Ceal Barry, who chaired the athletic director search committee, said George’s wide experience in managing finances, overseeing revenue growth and leading fundraising, capped off by his personal reputation and past record of success at CU-Boulder and at two other major universities, all combined to make him the clear frontrunner in the search.

“Rick is the complete package,” Barry said. “He brings the kind of broad-based experience in athletics financial and operational management that CU needs at present, but also the vision we need to attract new donors, fans and partners. I’m looking forward to working with him again, and I am as excited as I’ve been in a long time about the future of intercollegiate athletics at CU-Boulder.”

George and the chancellor agreed to a five-year contract, pending approval of the Board of Regents, which is expected to convene on the matter early next month. George will report to DiStefano through the offices of Senior Vice Chancellor and Chief Financial Officer Kelly Fox. As athletic director, he will also serve on the Chancellor’s Executive Committee, the consulting body that advises the chancellor and his administration on key internal and external matters, and that reviews and provides input on CU-Boulder’s programs, procedures and plans.