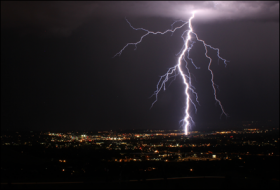 A lightning bolt strikes Boulder, as seen from the National Center for Atmospheric Research mesa west of town. Photo courtesy of John Jorgensen.

Electrical currents born from thunderstorms are able to flow through the atmosphere and around the globe, causing a detectable electrification of the air even in places with no thunderstorm activity.

But until recently, scientists have not had a good understanding of how conductivity varies throughout the atmosphere and how that may affect the path of the electrical currents. Now, a research team led by the University of Colorado Boulder has developed a global electric circuit model by adding an additional layer to a climate model created by colleagues at the National Center for Atmospheric Research (NCAR) in Boulder.

The results, published in the Journal of Geophysical Research, show that the atmosphere is generally less conductive over the equator and above Southeast Asia and more conductive closer to the poles, though the atmosphere’s conductivity changes seasonally and with the weather.

Research into atmospheric electrification stretches back to the 1750s, when researchers, including Benjamin Franklin, were trying to better understand the nature of lightning. In the 1800s, scientists measured changes in the atmosphere’s electric field from the Kew Observatory near London, and in the 1900s, the Carnegie, an all-wooden ship built without any magnetic materials, crisscrossed the ocean while taking atmospheric electricity measurements that are still referenced today.

But obtaining a global picture of atmospheric conductivity has been difficult, in part because the atmosphere’s ability to channel electricity is not static. Ions, which allow current to move through the air, are added to the upper atmosphere by a continuous bombardment of galactic cosmic rays and to the lower atmosphere through radioactive decay. But those ions can be removed from the atmosphere in a variety of ways.

“They can recombine, to some degree, but they also attach themselves to aerosols and water droplets,” said Andreas Baumgaertner, a research associate in CU-Boulder’s aerospace engineering sciences department and lead author of the study. “Once they are attached to a heavy particle, like a water droplet, then you’ve lost the ability for it to conduct a current.”

The amount of water droplets in the atmosphere varies as moisture-laden clouds move through an area, and the quantity of aerosols varies depending on their source. Aerosols are pumped into the atmosphere from tailpipes and smokestacks as well as from erupting volcanoes.

Baumgaertner and his colleagues—including CU-Boulder Professor Jeffrey Thayer, director of the Colorado Center for Astrodynamics Research; Ryan Neely, an atmospheric scientist at NCAR; and Greg Lucas, a CU-Boulder doctoral student in aerospace engineering sciences—came up with the idea of using NCAR’s existing Community Earth System Model to get a global picture of conductivity because the model already took into account both water vapor and aerosols.

The team added in equations that represent how many ions are produced by cosmic rays from space and by radioactive decay through radon emissions from the Earth’s surface. They also added equations for how those ions react in the atmosphere. The resulting 2,000 lines of code allowed them to create the first global picture of conductivity and how it evolves with time.

What they found was that, during a year, the atmosphere was on average less able to conduct electricity above areas of the globe that also have high emissions of aerosols, especially in Southeast Asia. In general, the atmosphere above the equator also was less conductive, mainly due to fewer galactic cosmic rays than at the poles. The researchers also found that the conductivity of the atmosphere as a whole varied with the seasons and was generally less conductive in June and July than in December and January.

The research team is now working to feed data on frequency and location of storms into the model so they can better understand how the current provided by lightning actually moves.

“The next step is to incorporate the distribution of thunderstorms,” Lucas said. “Currents generally travel upwards above thunderstorms distributed around the equator and return down over the poles, away from the thunderstorms. Part of the future work is going to be determining what influence those thunderstorms have on the global system.”

Funding for the study was provided in part by the National Science Foundation’s Frontiers in Earth System Dynamics program and the U.S. Department of Energy.